When she’s not running around campus between meetings and classes, newly elected Student Government (SG) President Bhumi Patel can be found in the cozy confines of her University Village apartment watching “Friends” surrounded by her friends.

“We all love tea, so we have teatime,” said Patel’s roommate, Kate Maier.

The two met in middle school in Englewood, Fla., and became friends in high school when they both joined student council.

Patel, a junior majoring in exercise physiology with a business minor, will be inaugurated on Wednesday, along with her Power of U running mates, Vice President Justin Borroto and Treasurer Robert Chiste.

The ticket’s platforms include creating and fostering internships abroad.

“She really cares about things she does … and that’s infectious to the people around her,” said Borroto, who first met Patel during IMPACT their freshman year. “I look to her for strong guidance in all things that are going on.”

Also at IMPACT was one of Patel’s closest friends, Zak Seed. The two met when they moved in early before freshman year. They now live a floor apart.

Seed said he expects only the best things from her.

“She’s got an incredible team standing behind her,” he said. “I think a lot of different areas of the student body are on board together with her visions and her goals.”

Toward the end of her freshman year, Patel campaigned in support of the Taking U Forward ticket. When its leader, Brandon Mitchell, was elected president, he encouraged her to apply for an advisory board position. During the 2011-12 school year, Patel was the co-chair of the Dining Services Advisory Board.

At the end of her sophomore year, she supported Inspired by U and was chosen by current SG President Nawara Alawa to be the executive-at-large external cabinet member.

It wasn’t until the fall of 2012 that she began thinking about running for SG president. After her Power of U ticket won the election in late February, she immediately began formulating the rest of her team.

“She’s definitely the type of president that doesn’t care about recognition,” SG Advisor Danielle Howard said. “She always cares about her board, the people she’s working with, events to make sure they go well for students. She wants to make sure everything’s perfect.”

As she gets ready to take the reins from Alawa, Patel said she is eager to get the ball rolling.

“I’m most excited about all of our initiatives and the team that we’ve put together,” she said. “I’d say my biggest strength is the team.” 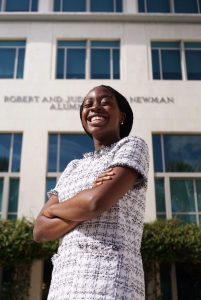