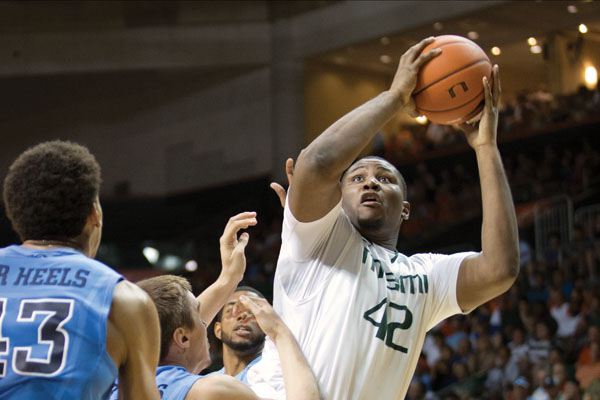 University of Miami coach Jim Larranaga did his best Muhammad Ali impression, senior Julian Gamble photo-bombed yet another television interview, and the Canes rolled past Illinois on Sunday, 63-59, to reach the Sweet Sixteen.

The Canes’ second-round game against the Pacific Tigers two days prior was essentially over by halftime – Miami led 40-19 at the break. But the Fighting Illini almost pulled off the upset, giving the Canes all they could handle.

“Our hats are off to Illinois,” Larranaga said. “I thought they played the best defense on us we have seen. They were so active in their man-to-man pressure, and after the game was over I was still kind of stunned.”

Unflinching defense on Shane Larkin and Durand Scott paired with some lethal 3-point shooting led Illinois to a one-point lead with 1:24 to go. Just 24 seconds later, Larkin’s clutch step-back jumper from beyond the arc would put Miami ahead for good.

“I have made that shot in the Carolina game, and I kind of had a mindset of shooting that shot when I came off the ball screen, so I just had a lot of confidence,” said Larkin, who played all 40 minutes and scored 17 points.

Junior Rion Brown came up huge for Miami as well, scoring a game-high 21 points on 50-percent shooting from the 3-point range.

“Different players step up on any given night,” senior Trey McKinney-Jones said. “This game Rion had the hot hand, and Shane was finding him, and he was knocking them down. He was very big for us.”

After the narrow escape, Miami (29-6) traveled to Washington, D.C., where they will play Marquette (25-8) on Thursday.

The Golden Eagles have played close contests in both rounds leading up to the Sweet Sixteen. It took a late-game surge to advance past Davidson, and a ferocious back-and-forth with Butler went Marquette’s way as well.

“The thing you have to recognize in Marquette is the way they’ve won their first two games,” Larranaga said. “They’ve come from behind in both games and played very, very well down the stretch. They’ve played incredible defense, they’ve gotten the offensive boards, and a guy like Vander Blue has made some incredible plays. So our players will be very well aware and very well prepared come Thursday night.”

If the Canes can contain Blue – who put up 29 points against Butler – and fend off any second-half comebacks, they have the size to get over Marquette into the Elite Eight.

Miami, however, will be without center Reggie Johnson. The university announced that Johnson sustained an injury against Illinois and did not travel with the team.

He is expected to be available for the Final Four, should the Hurricanes make it to Atlanta.