Alexander Björklund and Sebastian Furrer are the faces behind – or well, underneath – the cassette headpieces. The Swedish DJ duo is managed by Ash Pournouri from At Night Management, who happens to be the manager behind Avicii’s ascent to stardom. In June 2011, the duo came together and became “Cazzette.”

The duo dislikes the term electronic house music or “EDM,” because it meshes all genres into one. As a result, they coined the term “dub house” to represent their tunes. Now, they are set to go on tour in the U.S. in September.

The Miami Hurricane got the chance to sit down with both members of Cazzette and talk about the electronic dance music movement, their professional goals as DJs and their personal favorite genres of music.

The Miami Hurricane: How did you get into the music scene?

Alexander Björklund: I’ve always been a huge fan. My dad always played a bunch of music for me. And for me, I don’t know really, I discovered DJing when I was around 14 or something like that, and I was just hooked instantly. And since then it’s just been all about electronic music for me, even though I love all genres.

Sebastian Furrer: It’s the same thing for me basically, my dad was playing trance every time we had vacation in the car from Sweden to Italy and stuff like that. So it’s always been electronic music since I was a kid.

TMH: This summer you guys are working on your first single and the tour in September, so how do you guys feel about everything? What do you hope to accomplish while your touring the United States?

AB: We’re just really happy that we get to do this, and we just try to get as much inspiration as possible when we are on the road, and try to produce tracks, even though we travel all the time. We just want to keep on working, and ya know, we have so much to show, and we really want to experiment with different genres and stuff like that. So just work hard and have lots of fun.

TMH: What kind of music do you enjoy that’s not electronic music?

AB: Leave some for me, man! Ambient, chill out stuff.

AB: Which is electronic, too…

SF: Yeah, but, yeah, but whatever. I listen to it in whatever spare time I have.

AB: I don’t see mainstream as a negative term, but yeah we also want to sell out stadiums and stuff like that. I think that’s a lot of artists’ goals, and there’s nothing wrong with that. But that doesn’t mean you have to sell out music-wise.

SF: I think mainstream is a word for people that, it’s been a negative word, like everyone thinks is negative because when people are successful and do something good, and when they’re music’s doing good on radio and playing at large shows, why is that negative? They’re like, ‘Oh they’re selling out, they are mainstream.’ They’re what? They’re doing their thing. They’re having fun, and they’re doing a good job.

AB: So if we can succeed by just doing what we’re doing, which is music, and a lot of people like, what’s not to like?

TMH: If you had to describe electronic dance music to someone who’s never heard it before, how would you describe it?

SF: I would say electronic dance music, EDM, that term I think is a term for every type of electronic music genre: dub step, electro house music, deep house. Everything is different. It’s like saying that rock is the same as death metal; it’s not. Like death metal is maybe like dub step if you compare it to electronic music, you know what I mean? So I don’t like the term EDM just because of that. It makes everything into one thing. But I mean to describe electronic music in general maybe, I don’t know. It’s just four-on-four beat. Often of just doom doom doom, some beats with like bass on it, like synthesis on it. It’s very nice, it can be melodic, it can be harder, it can be more like techy.

AB: There’s no easy way to describe one; it’s such a wide term. Electronic music can be anything from Aphex Twin to Eric Prince, which are complete opposites.

SF: Today you can listen to something that sounds like opera and rock and death metal in one track, and it’s like four-on-four beat on it, and house bass, and it sounds like house music. But I don’t think there’s specific genres anymore, everything’s kind of mixed into one thing.  Music is basically four-on-four beat with other stuff in it, other elements.

TMH: How did you guys come up with the name Cazzette?

AB: That was our manager. He came up with it, the proposition. We liked it. So we didn’t come up with it, but we were instantly on board with it because we think it’s a cool name, we can do lots of stuff around it. It’s great to be able to bring in something other than just music to the shows. We have the heads, and we’re planning to expand.

TMH: How heavy are the cassette heads?

TMH: How much in kilos?

Rambo’s College Survival Guide: The art of pregaming
Dear V: My boyfriend’s experiments are turning me off… 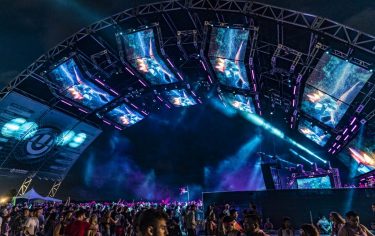