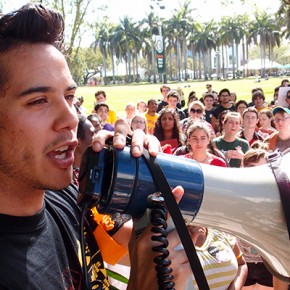 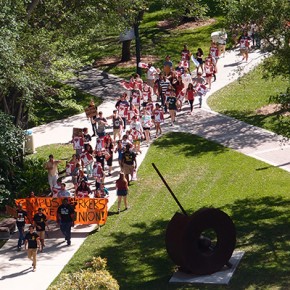 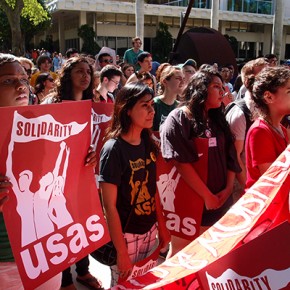 Students Toward A New Democracy (STAND) members, along with college students from across the country, gathered at the Rock Friday afternoon in protest of unjust working conditions faced by Chartwells employees on campus.

Chartwells is the company in charge of most food services at the university. The protest was a component of the United Students Against Sweatshops (USAS) national conference hosted at the University of Miami Friday and Saturday.

“We thought, ‘We have a lot of other students from other campuses on our campus… The moment is now,’” said sophomore Rebecca Garcia, a member of STAND.

Over the past year and a half, the Chartwells workers on campus have been attempting to organize and form a union, according to senior Javier Figueroa, a member of STAND.

For most of the workers, benefits are not affordable, and they want to be able to have the voice to improve their lives and the lives of loved ones, Figueroa said.

“The university claims they have no say in this, that it’s not their problem, that it’s between the workers and Chartwells,” he said. “But if we believe UM to be an institution with values, then it’s definitely their problem.”

More than 200 students at the Rock chanted “Shalala Step Off It, People Over Profit” and held banners painted with slogans, such as “Campus Workers Deserve A Union.” STAND members and attendees of the USAS conference hoped to bring attention to this issue and urge the university to take action.

“We know that Chartwells is the perpetrator here but that the university can be and should be the solution,” Figueroa said. “Shalala should intervene.”

Two groups of students assembled outside of each dining hall to listen to speeches by STAND members. Garcia gave one of the speeches.

“These workers are not treated with respect,” Garcia told the crowd Friday. “These workers want a way to fight – it is not a meaningless fight. It is a fight for their livelihood.”

Garcia felt that the speech was a success.

“… the student is in a tremendous and fascinating position to be an agent of social change and that’s an amazing position to be in, and I feel like a lot of students don’t realize that unfortunately,” she said.

The students also participated in a flash mob at the Hurricane Food Court, chanting to the tune of Gangnam Style. Several protestors then walked to the Ashe Building and into the office of President Donna E. Shalala.

“It was loud, in your face, but it wasn’t rowdy, wasn’t disruptive,” Garcia said. “That was the tone that we wanted to convey … At least we got our message across in a very conspicuous way.”

The students wanted to demand a meeting with Shalala to put pressure on the administration to respond, Figueroa said. Though Shalala was not available, the students delivered a petition and a letter from the Coalition for Workers Rights to her secretary.

“By students being up there, showing support, being visible and workers seeing this huge support from campus, they feel safe,” Figueroa said. “They feel that they can speak up.”

STAND has organized in support of Chartwells workers in the past. Last semester, members circulated a petition in favor of the reinstatement of cashier Betty Asbury after she was fired in October.

Chartwells had dismissed “Miss Betty” on grounds unclear to students, which sparked campus-wide activism surrounding Chartwells and the way the company treats its employees.