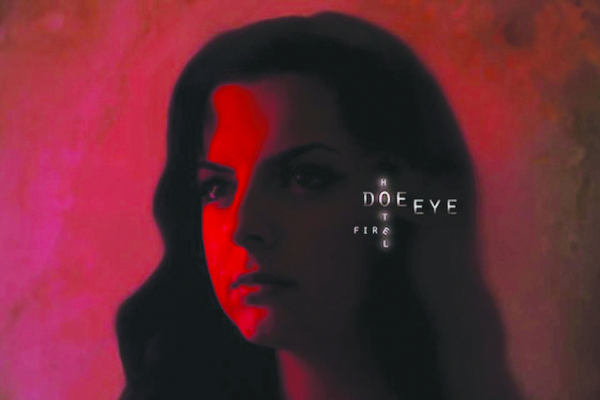 A new voice has joined the alternative music scene. Maryam Qudus, a college student who records under the pseudonym Doe Eye, debuted in 2011 when her single “I Hate You” premiered on San Francisco’s Live105.  Maryam was voted the No. 1 artist on the West Coast in Billboard’s Battle of the Bands in 2012. Her second EP “Hotel Fire” was released in September of that year. Now she’s back in the studio, working again with producer John Vanderslice to record her first full-length album. The Miami Hurricane got the chance to speak with Maryam about her inspirations, musical tastes and experiences being a college-age recording artist.

The Miami Hurricane: When did you first start getting into music, and what inspired you to pursue it?

Doe Eye: I always loved music … For my 12th birthday, I asked my parents to buy me a guitar. Once I turned 16, I was basically working to pay for all my training on guitar and piano and voice. I wasn’t thinking that I was going to pursue music. I was doing pre-med classes in college, and then I decided that I hated it. I applied to music school. I got into the Berklee College of Music in Boston. I went there for about a year and started songwriting and that’s kind of how it started.

TMH: Did you have specific inspiration when you were writing [“Hotel Fire”]?

DE: That title came from when I was living in Boston for a year. It was my last couple of months in Boston and I had to lease my apartment out. I was getting ready and, all of a sudden, all the power went out. I went outside and saw that there was a bunch of people running down the street and there was smoke in the air. I asked a girl what happened and  she said that there was this fire at, I think it was the Hilton Hotel … there was an electrical explosion at the hotel that caused almost all of Boston to black out … I had to be in complete pitch-blackness. So I spent that time writing … and that’s what inspired the name of the EP and the song itself.

DE: My inspirations change all the time, but while I was writing this record, I was really influenced by Arcade Fire and I was inspired a lot by Saint Vincent and Sufjan Stevens … and Beach House. I’m listening to Bat for Lashes a lot, Elastica, the Yeah Yeah Yeahs, Jack White, [and] Edward Sharpe and the Magnetic Zeros.

TMH: Were you in school while you were recording and promoting “Hotel Fire?”

DE: I recorded “Hotel Fire” over the summer. When the EP came out, I took the semester off from school to focus on the release. But my first song, “I Hate You,” came out in 2011 and went on the radio … That’s when everything got really crazy with my career. I would have to travel back and forth between Boston and California … to play shows while I was going to school full-time. And I’m doing it now. I’m in school and I’m working on a full-length record.

TMH: How do you balance school and work?

DE: It’s a lot of time management and dedication, and being completely focused … also not really having a social life … It’s kind of like when you start exercising. If you haven’t exercised in a while, the first few weeks your body’s sore and you’re so tired, but if you continue … your body doesn’t hurt as much anymore and you’re actually more motivated… You just have to be really driven to do it. I am tired a lot, but you make it happen.

TMH: Where did you get the name Doe Eye?

DE: The name came from a nickname that my friends gave me when I was a kid … At the time when I was starting to write my own music I didn’t want to go under my own name. I’m into so many different genres of music that in the future if I ever did want to go in a different direction I didn’t want my name to be attached to a specific genre, so I chose that nickname as my moniker for my music.