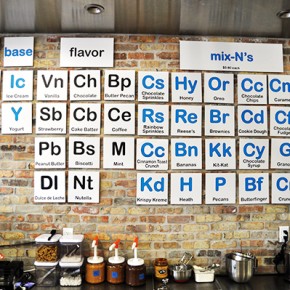 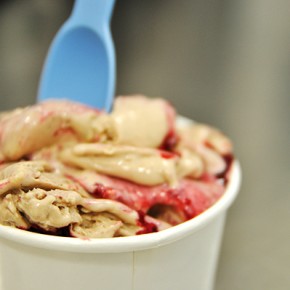 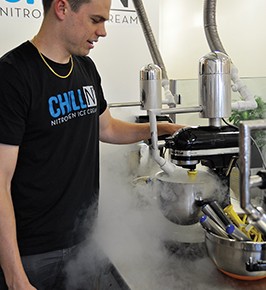 At Chill-N, a periodic-table menu hangs on a brick wall and fog occasionally fills the crevices of the Pinecrest store. Customers stream in to try something unusual – ice cream treats made to order with liquid nitrogen.

The founder of the store, Chuck Woodard, isn’t a typical business owner. A junior majoring in finance at the University of Miami, Woodard, 21, and his business partner Danny Golik opened the first liquid nitrogen ice cream shop in the Miami area last fall.

“When I first tell people I own a business, they don’t understand the concept,” Woodard said. “They always ask first if I’m in school.”

The idea for starting the business began when he was a freshman.

“Friends of mine told me of a similar concept in Orlando of liquid nitrogen ice cream that they were mixing in a converted mechanic shop,” Woodard said.

Initially, Woodard knew nothing about the food or restaurant industry, so he began by looking up ice cream recipes and buying a nitrogen tank to put in his garage. From there, he tested ice cream recipes with liquid nitrogen for four months.

“I lived with five guys and when I made ice cream, that’s all we would eat,” Woodard said. “The first flavor I made was vanilla.”

When making ice cream, the faster it freezes, the smaller the ice crystals. The smaller the crystals, the smoother and creamier the ice cream tastes. The liquid nitrogen flash-freezes it like a cooking gas, except it is really cold – around minus 320 degrees Fahrenheit.

“Ice cream is abused in a freezer,” Woodard said. “With liquid nitrogen ice cream, it’s like it was made in the Ben and Jerry’s factory and it’s coming straight off the production line, so you get the freshest product.”

To pursue his idea, he looked for a partner and found one in Golik, a recent graduate from the University of Florida. Both went to the same high school, Westminster Christian School. Golik, 25, was also an entrepreneur starting his own audio products company called Neuhaus Labs in 2009.

“He is one of my smartest friends and I thought he would bring a lot of value to the business,” Woodard said.

Originally, Woodard and Golik wanted to call the shop Brain Freeze, but 7-Eleven had that name trademarked. So Woodard went with something he had used in a high school business venture.

“I used to make print T-shirts in high school called Chill-N and sell them from the back of my car,” Woodard said.

Since the store opened about five months ago, Woodard, a full-time student, occasionally finds it hard to manage the business and school, but he said he takes it week by week.
One of the most popular flavors is Nutella, but customers can choose from a variety of flavors as well as toppings, which are presented on the periodic table menu.

“Our ice cream and frozen yogurt is very customizable,” Woodard said. “Every time we think of something new we say, ‘Let’s try it,’ and then put it out in the shop.”

The liquid nitrogen ice cream has attracted customers from all over Miami. Some of the most devoted customers have taken their commitment to the next level.

“I would always go in for yogurt, so one day I just asked to work there,” said Andrya Hernandez-Robles, a senior at Palmetto High School. “I saw how cool they were and imagined how much fun it would be. If I was going to get a job, I wanted it to be there.”

Golik and Woodard are now investing in new nitrogen systems and working at expanding the store. They also would like to start a franchise so more people can taste their product. They hope to open locations up in South Miami and Aventura.

“I’ve always been entrepreneurial-minded and, as cheesy as it sounds, it’s a dream come true,” Woodard said.