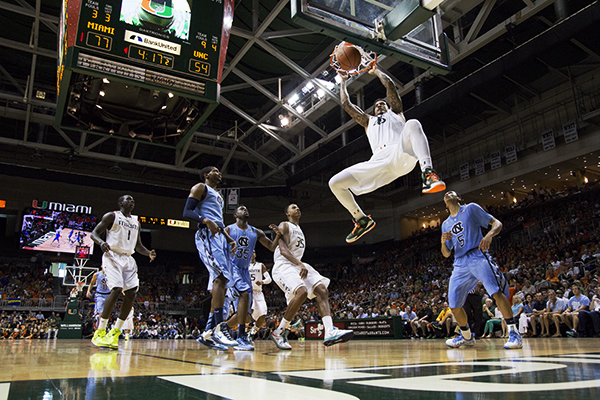 Miami turned a conference challenge into a carnival on Saturday afternoon, demolishing North Carolina by 26 points as the Hurricanes’ ACC crusade reached historic new heights in front of a sold out crowd at the BankUnited Center.

Sophomore Shane Larkin led a fearless group of red-hot shooters to an 87-61 rout Saturday afternoon that lifted Miami’s winning streak to 11, its conference record to 10-0, and its ranking to an all-time high.

“When you shoot like that, I think we’re one of the better teams in the country,” Larkin said. “Tonight was just one of those nights when everything was going in.”

The Canes built a double-digit lead early on, scoring the first nine points of the game and nailing a flurry of 3-pointers. Miami (19-3) hit 10 from beyond the arc before halftime, including four from Larkin.

By the final buzzer, the Hurricanes tied a school record with 15 3-pointers and a remarkable 13-for-19 long-range display from their five starters.

“All of a sudden they started making every shot,” Tar Heels coach Roy Williams said. “A lot of teams couldn’t stand out there with no defense on the court and make 15 out of 26.”

Miami shut down Carolina’s vaunted offense, which ranked third in the nation with 79.1 points per game. James Michael McAdoo leads the Tar Heels (16-7, 6-4 ACC) in scoring with 14.9 per game, but he managed just six points on 3-of-12 shooting.

Hurricanes center Julian Gamble tallied four blocks and remained out of foul trouble as the anchor of a Miami defense that kept North Carolina off the free-throw line until well into the second half.

“It’s crazy,” said senior guard Durand Scott, who scored 17 points. “I see how great of a team we can be. We’re just rolling.”

Saturday was the kind of thrilling performance that brought another capacity crowd to its feet, which included Miami Heat superstars LeBron James, Dwyane Wade and former Hurricane James Jones. After Larkin’s alley-oop off the backboard to a trailing senior forward/center Kenny Kadji, even James and Wade leapt out of their courtside seats.

“It’s a great feeling knowing that people at that level actually realize what you’re doing down here,” said Larkin, who finished with a team-high 18 points and nine assists. “Even though they’re on the professional level, they still have enough respect to come watch college kids.”

Miami set a school record for ACC victories in a season – and there are eight games left on the schedule. The Canes’ stellar play on the road led them to a No. 8 AP ranking a week ago, and two blowout home wins almost guarantee that Miami will climb into the top five for the first time in program history.

No. 1 Indiana, No. 2 Florida, No. 3 Michigan and No. 5 Kansas each suffered losses to unranked opponents over the last week. While the polls have reflected a large degree of instability this year – the top-ranked team has fallen in five consecutive weeks – Miami has been a model for consistency.

“The guys just never let up,” head coach Jim Larranaga said. “And that is the mark of a good team.”

The Canes travel to Tallahassee for a 7 p.m. meeting with the Seminoles on Wednesday, and will then head to Clemson for a Sunday matchup that tips off at 6 p.m.