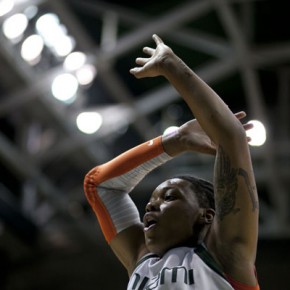 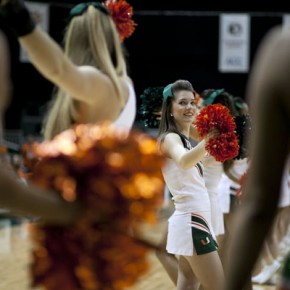 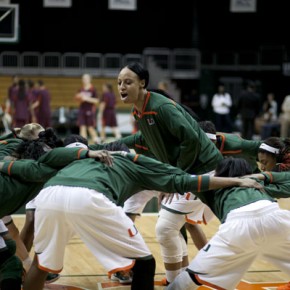 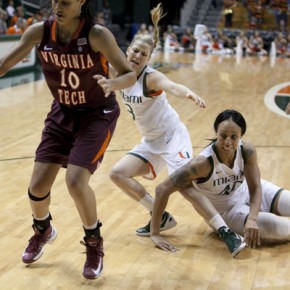 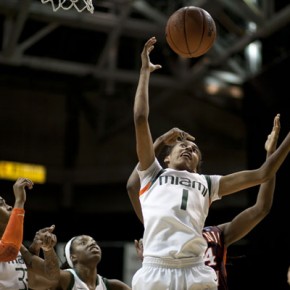 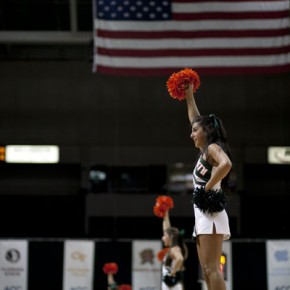 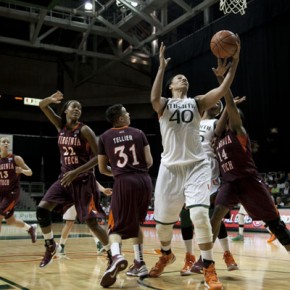 BACK IN THE WIN COLUMN: Senior guard Stefanie Yderstrom and senior center Shawnice Wilson fight for a rebound against Virginia Tech during Saturday’s 68-42 win against the Hokies. Cayla Nimmo // photo editor

A return to the BankUnited Center and a flip of the calendar to February got the squad back in the win column, as Miami trounced the Hokies 68-42.

It was an ideal way to bounce back from a demoralizing 82-43 road loss at Duke Thursday night.

In the two days since the loss to the Blue Devils, Miami coach Katie Meier preached positivity.

“We were bouncing back negative and what you send out is going to come back two-fold, and we were sending out pouty and kind of bad attitudes and that didn’t get invited,” Meier said. “We just cut it off and we really had to start just going back to, anything that you could celebrate we needed to celebrate, because I’ve never had a team that I saw as low as that team in the second half of Duke, and I’ve never seen it before, and it needed to change and I think it did.”

A big reason for the success that Miami (15-7, 6-5 ACC) had against Virginia Tech was the play of its underclassmen.

Sophomore guard Michelle Woods led all scorers with 15 points and  also
led with six assists to go along with just one turnover.

Suriya McGuire, another sophomore guard, had 10 points on 5-of-10 shooting from the field to go along with four assists. Freshman forward Keyona Hayes added eight points and grabbed a team-high 11 rebounds, including seven on the offensive end.

“Very important for me,” Meier said of seeing the underclassmen’s contributions. “I coach and I love the sport and whatever, but the messages and the lessons mean everything to me and to see the turnaround – our first practice after Duke when I tried to huddle the team and they were so overwhelmingly positive and confident. It really touched me. We’re going to be all right, we’re going to keep learning lessons, but you’re never going to see that low point again. It’s not going to happen to this team.”

Another aspect of UM’s blowout victory was superb defense on the Hokies. Miami held Virginia Tech, who had 20 turnovers, to 31.4 percent shooting, including 0-for-7 from 3-point range.

“That was our [goal], to get back to the old Miami,” McGuire said. “We’re known for getting steals, getting tips, getting run outs. So that’s what we were trying to get back to.”

The game changed in the final eight minutes of the first half, when Miami went on a 16-4 run to extend its lead from four to 16 entering intermission.

The Hurricanes then opened the second half on a 17-5 run to take a 56-28 advantage with 11:09 left, effectively ending the contest.

Virginia Tech, now 7-14 (1-9 ACC) on the season, was paced by 12 points each from freshman guard Lauren Evans and junior forward Uju Ugoka.

Miami returns to the court 7 p.m. Thursday on the road against Clemson.

Speak Up: If money was the only thing stopping you from getting a college education, how far would you go to get it?
Rambo’s College Survival Guide: The state of hip-hop according to a pale white dude