According to the Merriam-Webster Dictionary, a professor is “a faculty member of the highest rank at an institution of higher education.” Although this definition holds true, many students see their professors as more than just “teachers.” They are mentors, role models and influential figures.

Most full-time students spend more time at school than they do at home. Spending 12 hours a week in class is the norm. This means, being lectured by authoritative figures that teach you what they know – while occasionally weaving in their own opinions.

It is understandable that outside of the classroom, professors are human beings who have their own beliefs just as students do. But advocating their personal thoughts to students is not always necessary.

As students, we have a right to question our professors. Although they are an authority figure, they are not always right. There are times you will disagree with them and other moments when their thoughts will provoke feelings of anger or curiosity. When this happens, make a statement.

If students don’t question their professors, who will? College is the time to figure out who you are and what you stand for – as a student and an individual.

Professors who encourage students to believe what they believe are wrong. Some students may agree with their professors’ positions, but other students won’t. And that’s understandable.

Take a brief look at politics. President Barack Obama is a Democrat. Some members in Congress are Republican. Obama doesn’t encourage these GOP members to side with the Democratic Party, but he advocates compromise.

In this way, professors should do the same. Although it can be beneficial for professors to state their opinions, students should have a right to take their stand and challenge their views. This makes for a better learning environment.

When professors interject their opinions into their lectures and do not allow students to raise contradicting thoughts, a negative impact arises. This can result in students despising the professor, missing frequent classes or dropping the class altogether.

As the semester continues, don’t be afraid to raise your hand in class if your professor says something you may not agree with.

Rejuvenate life with a new perspective
Dear V: Is a climax a month worth the relationship?… 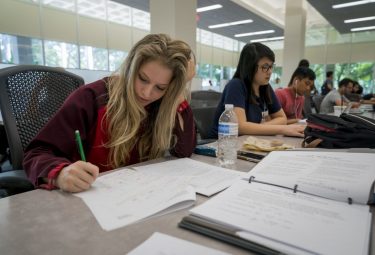