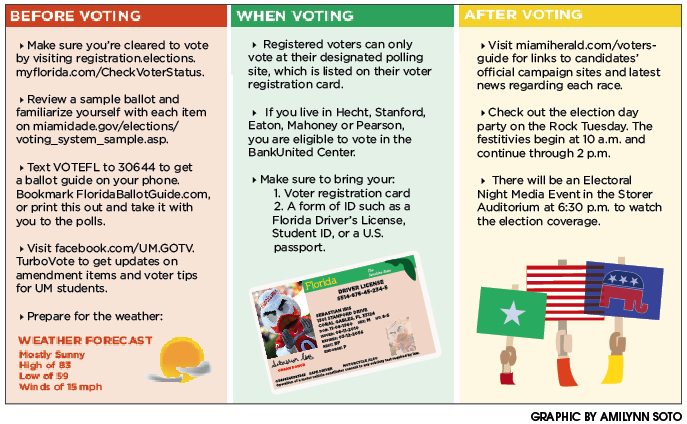 She stood next to a couple that works in Tampa, but is registered to vote in Dade County. They came back to Miami to make sure they had a say in this year’s presidential election. “It was the guy’s 31st birthday. He said he’d never forget how he spent it,” said Collie, an athletic training major. “I had to wait in line … which was pretty inconvenient, but it was my first time voting and I realize the importance of elections, so it was definitely worth the wait.”

Collie also mentioned that the weather and the crowd enhanced her experience as a first-time voter.

“It was sunny, but thankfully not too hot,” she said. “I was actually pretty surprised with how patient most of the people were. No one around me was angry or upset. Everyone spoke about how important it was to be there, so they were more than willing to spend the time.”

Long lines and partly sunny skies await voters on Tuesday. Get Out the Vote (GOTV) co-chair Alessandria San Roman encourages students to read up on the items on the ballot before going to the polls.

“I really feel that they should be making an informed decision. They should know exactly what they’re voting for,” said San Roman, a sophomore majoring in political science. “It’s a ballot that’s so lengthy this time. It helps if people are informed ahead of time.”

The Coral Gables ballot is five pages long, printed front and back. It contains a total of 38 items for voters to decide. The ballot also contains 11 proposed amendments to be made to Florida’s Constitution.

The amendments landed on the ballot after politicians in Tallahassee decided to let citizens give their input on the various issues up for vote.

“We were planning to put together a cheat sheet, a one-sentence blurb of what each of them means,” San Roman said. “But it was so lengthy and very confusing, so it’s kind of difficult.”

San Roman said she and the GOTV movement recommend voters review the measures on FloridaBallotGuide.com. The site includes a comprehensive guide for voters to help speed up the process once they enter the voting booth.

GOTV, along with TurboVote, have also been posting facts about the amendments on their Facebook pages.

Gilbert Arias, assistant vice president for student affairs, believes every student should exercise his or her right to vote on Election Day.

“It’s a team. It’s a whole effort,” Arias said. “It’s an excellent opportunity for them to exercise their right to vote. Everyone has an opportunity to vote for their future.”