Junior Olivia Morejon donates a pint of blood at the Battle of the Buckets drive in the UC. The event helped raise money for Fun Day, a service event where intellectually disabled Miami residents come to UM and spend time with students. Cayla Nimmo // Photo Editor

On a typical day, a UM student would scoff at the prospect of teaming up with a Florida State student, even for a common cause. But this week, UM joined forces with FSU for the Battle for the Buckets fundraiser, an annual blood drive held at both schools.

Though the event still retained a competitive nature, the two schools held the event to benefit the Community Blood Centers of Florida (CBCF).

Since 2009, the Fun Day committee has hosted Battle for the Buckets in order to finance their annual event. Fun Day, one of UM’s longest-standing days of service, was first held in 1983, five years before the Butler Center was founded. Tentatively scheduled for Feb. 16, the event welcomes Miami residents with intellectual disabilities to campus, where they are paired up with a college student and enjoy a day of carefree fun and friendship.

“Basically it’s like a big carnival-esque atmosphere,” said Lisa Cameron, who serves as the vice-chair for Fun Day.

During the three-day blood drive – this year was cut to two because of Tropical Storm Isaac – the CBCF donates $5 to Fun Day for each pint of blood collected. Other supporters for the fundraiser include the CBCF, the Marlins and Blue Bell Ice Cream. Each donor receives a pint of ice cream, compliments of Blue Bell, and a “Beat FSU” T-shirt.

Though the event only lasted two days this year, it was extended by two hours on Tuesday and Wednesday.

Last year, the event collected 349 pints, which translates roughly to $1,700. However, only 244 pints were collected due to the loss of a day.

“We’ve promoted it so much more this year,” said Amanda Corey, chair of Fun Day. “Last year we did it the first three days of school, so this year I think it’ll be a little less hectic.”

According to Corey, FSU’s blood drive takes place in September.

UM has won every year since the event began, and the results of the competition will be released after their event.

This year, the Fun Day committee decided to make Battle of the Buckets a competition among the freshman dorms in order to stimulate inner-campus competitions and increase additional participation.

The freshman floor who produced the most donors will win a of pizza party, compliments of the Fun Day staff; the pints are still being tallied.

The Florida State-Miami rivalry was born in 1951, when their teams first went head to head in an infamously contentious, and still annual, football game.

This rivalry is so profound, the 2006 FSU-Miami game is one of ESPN’s most-viewed college football games, post-season or regular season.

While initially motivated by the FSU-Miami rivalry, many participants enjoyed knowing they were benefiting their local community.

“I feel kind of tired, but it’s worth it because I can save people’s lives,” said Katherine Lee, a sophomore studying advertising and psychology.

“I donated because I knew that the small sacrifice I made would make such a huge difference in the lives of those in need,” she said. “Donating one pint of blood benefits four people.” 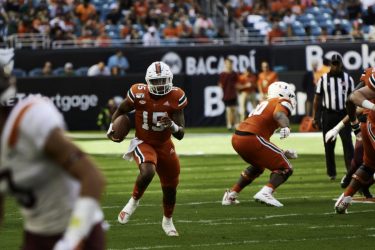