The Band of the Hour aimed to attract a larger audience during the 2011 football season, by performing popular sing-a-long songs like “American Pie,” “Piano Man” and “Hey Jude.”

To better serve the audience, lyrics appeared on the scoreboard video screens.

The tune of “I Will Survive,” for example, rang out from the football field during halftime at the home opener against Ohio State on Sept. 17. Under the direction of Associate Director of Bands Thomas Keck, the Band of the Hour led a crowd of more than 66,000 people in a round of karaoke.

The Band of the Hour, UM’s marching band, performs at every home football game. The band is comprised of brass, woodwind and percussion sections, as well as of dancers and the Hurricanette color guard. The musicians are undergraduate and graduate students at both UM and local community colleges.

“It’s all about getting everyone in the stands involved in what we’re doing during the halftime show,” sophomore drum major Taylor Rambo said.

Keck said that the band was highly successful in engaging the audience during the 2011 football season. In 2012, halftime performances will likely include a hip-hop show, a Latin music show, and a rock and roll show, according to Keck.

While the band motivates the crowd with its music, it also helps fuel school spirit.

“The band represents our school spirit,” said junior Yifan Zhang, who attended several homes games during the 2010 season. “So if the band is playing it gives the team a lot of support and it makes the students more lively.”

Stephen Yip, assistant band captain, explained that the band members truly get the job done when they play in the stands and distract the opposing team.

“We play when we’re on defense,” Yip said. “We create noise. We try to focus a lot more on getting students to jump, sing and dance.”

Walter Shaeffer organized the Band of the Hour in 1933. Shaeffer was a solo clarinetist and concertmaster with the U.S. Marine Band under renowned American conductor and composer John Philip Sousa.

In addition to appearing on national TV, the Band of the Hour has made several international tours to Latin America, performed in the St. Patrick’s Day Parade in Dublin, and appeared in three major motion pictures. The members even backed up Mike Posner and Ludacris last New Year’s Eve at Bayfront Park in Downtown Miami.

“Some like the activity of marching band, some do it for the social reasons to meet new friends, some do it because they are loyal Canes fans and want to be closer to the experience,” Keck said.

The Band of the Hour welcomes any student at UM who has had high school band, color guard or dance experience. Only Hurricanettes dancers and flags are required to audition. 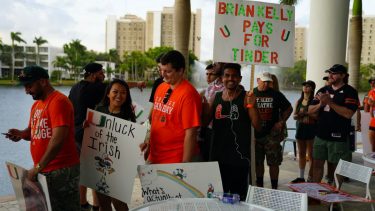 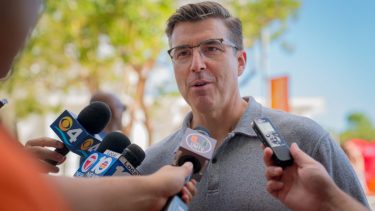