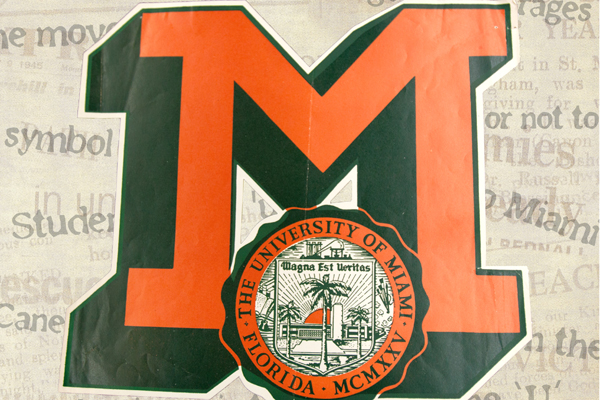 There are thousands of universities across the nation but only one gets to be The U. From the creation of the split-U logo to the forthcoming installation of the U statue on campus, the U identity has influenced culture at the University of Miami in a variety of ways. Here’s a look at how U logos and traditions have evolved.

SEE ALSO: FSU game inspired first man to throw up the U

Miami athletics had gone through several years of uniform and helmet changes, with inconsistent logos ranging from an M to UM. The Athletic Federation—now the Hurricane Club, the student-athlete scholarship fund—commissioned a logo re-design that brought about the split-U logo in 1973.

The athletic department was looking for something that would symbolize the University of Miami without having to say those words, according to Evelyn Schwartz, a former assistant athletic director with the Athletic Federation. The letters UM were not enough because they could have represented many other schools.

Miami-bred publicist Julian Cole, who was the first graduate of UM’s radio and television department, worked with graphic artist Bill Bodenhamer to develop the green and orange split-U logo.

In the middle of the U, different images for each sport were inserted, like a baseball player, football player or tennis player. The U was then used for slogans like “U gotta believe,” “U is great,” and “U is moving forward.”

Both Cole and Bodenhamer have since passed away but their legacy lives on. They designed not only the U but also the Miami Dolphins logo.

“If you think about it, it was quite a stretch,” said Lisa Cole, one of Julian’s daughters. “They took the U and said, ‘This is the university.’”

Schwartz said that the Athletic Federation ultimately wanted people who saw the split-U to automatically think of the University of Miami.

“Beyond our wildest dreams, this is what happened,” Schwartz said.

Coupled with the excitement of the growing sports program, there was a hype surrounding the U and it really stuck, said Schwartz. She said she believes that if the split-U logo were not created, people would not have even thought about calling Miami “The U.”

Simply saying The U did not cause any confusion because there was only one university in Miami, said John Routh, executive director of the UM Sports Hall of Fame.

Did Julian Cole know that he was creating such a lasting image and identity for the school? Carol Cole, Julian’s other daughter, said “absolutely not.”

“By him taking the U, he was taking a big step. That’s what he was good at,” Lisa Cole said. “He did what others didn’t.”

Former UM President Henry King Stanford set up a committee to find a replacement for the “U” logo, but students launched a “Save the U” campaign in response, according to an article in The Miami Hurricane in August 1979.

Walter Etling, a former Board of Trustees representative, said that many departments had adopted the “U” as a university symbol when the logo was developed, according to the article.

The article reported that Peter Zorn, the university’s Graphics Department chair at the time, felt the “U” could have represented any university. He wanted a logo to represent the whole university rather than individual departments.

Today we see the phrase “It’s All About the U” on T-shirts and overhear our classmates say it in passing, but students may be surprised to learn where the slogan comes from.

John Routh came to UM in 1983. He was the man inside the costume, known for his role as both Sebastian the Ibis and the baseball team’s Miami Maniac.

Routh said that the Athletic department coined the phrase “It’s all about the U,” but they used it for a very different purpose.

For the employees, who felt they worked hard and earned little, the phrase implied “We’re just doing this for the athletes,” according to John Routh, director of the UM Sports Hall of Fame.

“It’s ironic that, years later, it was actually the slogan and adapted,” Routh said.

Hold up your hands with your thumbs locked horizontally and your four fingers held tight and vertical. You’re throwing up the U.

The hand gesture was created in 1992 for a home football game against Florida State. Former UM cheerleader Bill Tigano, B.S.C. ’93, introduced the U hand motion for football fans to use as the Band of the Hour played the Star Wars “Imperial Theme.”

“FSU has the chop, and the Gators have their chomp, so I wanted to come up with something to identify us,” Tigano told Miami Magazine in 2007.

It’s still a tradition at football games, but now the hand gesture is recognized around the country and even the world.

“Over the years, it grew and grew,” Routh said. “Everyone now knows when you do the U, they know exactly what you’re talking about.”

Cristina Busto, a senior assistant director of admission, B.S.C. ’07, recalled an encounter with a U fanatic during an away football game against North Carolina.

Busto was wearing orange and green and a bag with the U logo, when a man from Tennessee approached her. He told Busto that he was a fan of the U even though he had never been to Florida.

“He even had a U logo tattoo with Sebastian the Ibis over it,” she said.

Todd Ellenberg, assistant vice president for communications and marketing, has also come across fans of the U in Ireland.

“I’ve been in other countries where people see that U and it’s like an instant bond,” he said.

When Chief of Police David Rivero arrived at the university in 2006, neither the police vehicles nor the uniforms identified officers as being part of UM.

Although the director of University Communications at the time told Rivero the U could not be used as part of the new police identity, the University of Miami Police Department began to use the U logo in correspondence. They created the UPolice logo for business cards, memos and letterheads.

“We were just ahead of the curve in recognizing the importance of the U as a symbol for the whole university,” Rivero said.

Then, in what Rivero called a risky move, he ordered all of the police cars repainted and the U added to the side of the cars. He also redesigned their badges in 2007 to include the U right on top, completing the UMPD transformation.

“We are now a department recognized easily by all in South Florida and the rest of the U.S.,” Rivero said.

The University of Miami Health Systems adopted the UHealth name and logo after research showed how well recognized the U brand was, according to Joanne Leahy, assistant vice president of marketing for UHealth.

Pascal Goldschmidt, dean of the Miller School of Medicine and CEO of the UM Health System, wanted to brand all of the medical care options offered at the school under one health system logo.

The research showed that people who saw the U thought of the University of Miami and not just its athletics program. The study went beyond the local community, with around 40% of people in the Northeast also recognizing the U, according to Leahy.

“People just knew what the U was, and they not only knew what it was but also thought very highly of it,” Leahy said.

The identity was launched in March 2008, but the research was conducted prior to that.

“And that’s how UHealth was born,” Leahy said.

Prior to the prevalent split-U we now all know and love, the university used the Miami bar logo on university documents and supplies. But in 2009, the split-U was adopted as the new identity of the University of Miami.

“It’s kind of an usual step for a university to use an athletic logo as its overall logo for the institution,” Todd Ellenberg said. “But given that we were so strongly identified with that mark, it really made a lot of sense.”

While the old logo did not get very positive results, participants thought the split-U was unique, modern and bold, according to Ellenberg.

“It’s been very, very enthusiastically received simply because everybody loves the U,” he said.

The split-U is one of the most recognizable collegiate marks nationally and may be the most pervasive graphic symbol throughout South Florida, according to the University Communications website.

What’s next for the U?

An $85,000 statue of the “U” will be assembled and installed in the fall. It will be near the Rock because of its central location on campus.

Former SG President Brandon Mitchell said that the “U” statue will improve the spirit on campus, as students have the opportunity to take pictures with it or touch on the way to a final exam.