With less funds, clubs get creative HANGMAN: Contestant Reko Rivera, 26, prepares for the next challenge during the first round of obstacles on G4 and NBC’s “American Ninja Warrior” on Wednesday. UM students raised money for their organization by attending the Tuesday filming. Cayla Nimmo//Assistant Photo Editor

On Tuesday night, Kevin Hamlin and about nine other Salsa Craze members stood applauding and cheering as they watched several brave locals conquer – or be conquered by – a challenging obstacle course that ended with an almost 20-foot climbable wall.

“Cameras were on us all the time and they would tell us ‘now a big round of applause,’” said Hamlin, Salsa Craze’s assistant secretary and firefighter paramedic in Miami.

The best part: Each Salsa Craze member that attended this filming of an episode of G4 and NBC’s “American Ninja Warrior” received $30.

“This is the sort of thing we’ve had to rely on this year to make money,” said Salsa Craze assistant treasurer Juan Jidy, who is a manager a Coral Gables health club.

For the 2011-2012 academic year, Salsa Craze received less than 15 percent of its budget – $1,335 – from the Student Activity Fee Allocation Committee (SAFAC). According to Salsa Craze Treasurer Lena Habash, the organization typically spends about $10,000 a year on T-shirts, competitions, guest instructors, its annual end-of-the-year banquet, and other costs.

The organization, which has more than 300 members, offers salsa classes to University of Miami students and the local community.

“You have the largest organization in the school and we have freshmen coming in from all over the world, but we don’t have enough money to put together certain events or functions just because we can’t get it,” Jidy said.

At the start of every academic year, student organizations are provided with funds by SAFAC. However, the committee makes it clear to groups that it can only be a secondary source of funds for student organizations, according to Peter Perez, treasurer of La Federacion de Estudiantes Cubanos (FEC).

FEC planned on attending the “American Ninja Warrior” event on Wednesday evening, but the filming was overbooked and the group was asked not to attend at the last minute.

Over the past several years, on-campus student organizations have been facing a decrease in available funds from SAFAC. Forced to find alternative funding sources to finance typical group costs and raise money for philanthropies, student groups like Salsa Craze are opting to organize creative fundraisers, from fashion shows to concerts.

Senior Robert Hupf, the fundraising and sponsorship chair of UM Alternative Breaks (UMAB), said the organization does not receive enough SAFAC funding to sustain itself.

UMAB created a sponsorship program this year to fund its community service spring break trips across the country. Its programming is one of the most expensive on campus. This year, the group went to Chicago to help developmentally disabled people and to Los Angeles, where they aided the homeless and people with AIDS.

The new “Adopt a Breaker” program allows individuals, businesses, and family and friends to sponsor a participant and pay for these breakers’ trips. UMAB raised approximately $19,000 this year from “Adopt a Breaker” and other donations.

“Personal initiatives like this are very effective because it asks the sponsor to take a personal action and grow a relationship,” Hupf said.

Other student groups that have organized new and unconventional fundraisers this year include the Alpha Delta Pi sorority, the Anime Club and the Association of Commuter Students (ACS).

The sorority Alpha Delta Pi will be hosting a breakfast fundraiser to raise money for the Ronald McDonald House, which houses families of pediatric hospital patients. At “ADPiHop” on Monday, the sorority will be selling pancakes and a drink for $5.

With the Miami Hurricon convention quickly approaching, the Anime Club has collaborated with local Sushi Maki restaurants, specifically the South Miami location, to raise money for the organization. During these fundraisers, students can present a flyer to their Sushi Maki waiters and 15 percent of their bill will be donated to fund the Anime Club’s Hurricon, the group’s biggest event of the year.

The Anime Club also hosts video game tournaments for $5 or $10 per participant during its “Friday Night Fights.”

According to senior Lauren Kessell, secretary of the Anime Club, the group’s past tournaments have raised more than $300 to fund their trips to Megacon – Florida’s largest anime, video game and comic convention – and Hurricon.

ACS has had a tradition of hosting a unique fundraiser for the past 11 years. ACS’ annual date auction collects money for a different charity every year. For the past two years, proceeds collected have been donated to the American Cancer Society.

During the event, 20 ACS members are auctioned off to the winning bidder, who will sit down for a dessert date following the auction. In the past, a bidder has offered between $25 and $400 for a date.

“Providing a fun time is better than just asking for money,” said senior Liliana Oyarzun, ACS president. “It lets the people donating know that they are helping the community.”

Anime Club’s “Friday Night Fights”: Friday from 6 to 11 p.m. in the University Lower Lounge. Pre-registration is $5 and $10 at the door.

O’Brien goes off in 11-4 win over St. Thomas
New Student Government Executive Board members make their way into office 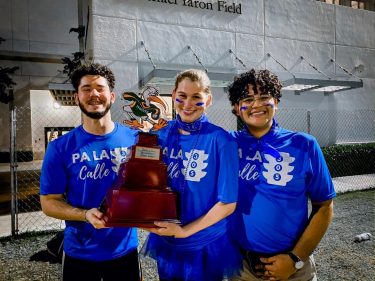 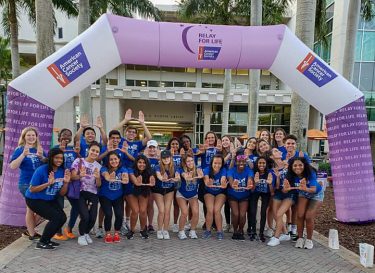