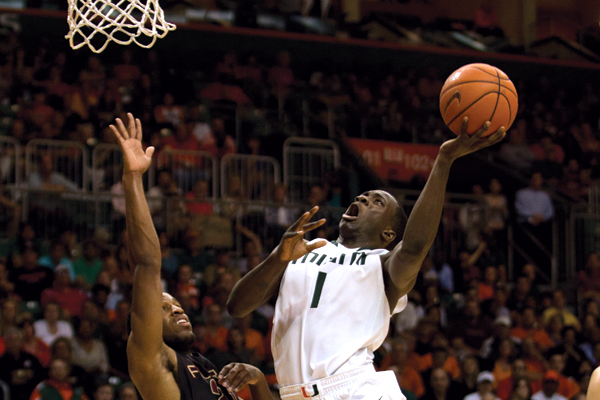 UM students stormed the BankUnited Center floor at the final buzzer as a season-high crowd of 7,261 were on hand to witness a much-needed victory against rival Florida State.

The crowd was the second-largest ever at the BankUnited Center, only behind last season’s game against Duke.

“It’s one thing I’ve always wanted — just for the crowd to storm the court and experience that feeling,” junior Durand Scott said of being rushed by the students, which hadn’t happened at a men’s game at the since a 2009 victory over Wake Forest. “I got it today, and it was just one of the greatest feelings of my life.”

FSU coach Leonard Hamilton extended the game as long as he could. The Seminoles began fouling with four minutes remaining, but UM hit enough free throws, broke the full court press and got the stops they needed to pull out the win.

Coach Jim Larranaga was pleased with how Miami, which had previously lost six straight and 11 of its last 12 to Florida State , was able to shine despite the news of Johnson’s ineligibility.

“The players have dealt with a lot of adversity, and they’ve been able to overcome it,” Larranaga said. “They’ve found ways to find something positive.”

UM outscored FSU, a team known for its defensive prowess, 43-19 after the 5:37 mark in the first half. The Seminoles led 18-11 at that point, their largest lead, and by the end of the Hurricane run, Miami obtained its largest lead of 17.

“You see the quality of their character by how they played today,” Larranaga said. “They didn’t hang their heads, they didn’t quit, they didn’t lose their confidence. They stuck together like any good team should and rose to the occasion.”

Larranaga tried four different offenses, by his count, in the first half to try and ignite the scoring and none of them worked. He then decided to switch his defense to a zone, which he rarely does for more than one possession at a time, and it worked, altering FSU’s strategy enough to force turnovers and get easy baskets the other way.

The consensus motivation, among the players, behind the team’s performance was to play hard for Johnson and prove, with a collective effort, they could win without him.

“It’s a game of basketball,” Scott said. “Just because one person goes down you can’t just quit and say, ‘He’s down so we can’t play.’ I’m pretty sure he wanted us to step up and do the things that are necessary, that coach wants us to do, to win this basketball game.”

Kenny Kadji scored an efficient 15 points on six field goal attempts. He also anchored the interior defense, which was missing its biggest asset inside in the 280-pound center Johnson, with five blocks and four steals.

“We just wanted to rally together as a team,” Kadji said. “We knew it’d be a team effort.”

Shane Larkin scored 13 on the night, going 8-for-9 from the free throw line. It was his first double-digit scoring output in his last five games.

Miami had a distinct advantage shooting beyond the arc Sunday. Miami shot 45 percent from distance while holding the Seminoles to 21.7 percent from long range.

The Hurricanes went on a 10-0 run to finish the half and took a 24-20 lead into intermission. The run came shortly after the Canes had been held scoreless for seven minutes of game time when FSU went on an 8-0 run.

The victory against ranked Florida State is monumental for this team that was in Joe Lunardi’s “first four out,” because it gives the Canes their second true quality win of the season, the first coming against Duke, which is valued tremendously by the selection committee.

Johnson was ruled ineligible earlier Sunday, with the NCAA talking to him about the incident as early as Friday, because of an ongoing investigation regarding his family receiving improper travel benefits under Frank Haith and the previous coaching staff. It is unknown how long Johnson will remain ineligible.

Larranaga says Johnson and his family were not aware of the legality of the benefits they received and the program is in full cooperation with the NCAA.

Miami has another critical matchup to come at N.C. State, a bubble team just like the Canes. N.C. State’s stock to make the tournament dropped Saturday with its loss to Clemson.