Equipped with a red scooter and a plethora of hugs, alumnus Kemy Joseph made a stop at the Rock as part of his World Kindness tour.

Joseph,  the CEO of the nonprofit organization U R Awesome and founder of the on-campus group Random Acts of Kindness (RAK), hopes to spread “The Art of Being Awesome,” a philosophy that focuses on the power of kindness and its effects on oneself and others.

“I got the feeling that the world needed kindness now more than ever,” Joseph said.

In Wednesday night’s event, Joseph discussed the main points of his philosophy.

He said that kindness benefits everyone in the short and long run because it is not tied to any religion or political thought.

He also said it’s good to use kindness while feeling stressed or angry to highlight the positive parts of those experiences.

“Every kind act causes kindness in others,” Joseph said at the event.

The tour started Jan. 25 in Key West and has no official end date.

Joseph will announce destinations online, seven to 10 days in advance.

At each destination, he plans to share his story at local schools and encourage others to join his scooter adventure.

“If people see my adventures and challenges, then it will show them that it is possible to be unconditionally kind,” he said.

The tour is being sponsored by  Joseph’s U R Awesome and the Genuine Scooter Company, which provided Joseph with his red scooter.

As a former president of  RAK, Joseph took the group’s mission of spreading kindness to others to create his nonprofit, which  promotes the same ideals but on a larger scale.

“I want to bring the world on a journey of kindness,” Joseph said. “U R Awesome was born out of the RAK spirit.”

A Miami-based organization, U R Awesome promotes a curriculum based on the principles, or ABCs, of Awesomeness.

“When you have self-love, you have everything,” said freshman Pablo Abrante, who attended the event.

One of Awesome’s main initiatives is an event called the Great Give Away.

It allows participants to develop a service project with the ABCs in mind.

UM’s first Great Give Away was led by RAK with the largest clothing drive on campus.

RAK member Valerie Hill is proud to be a part of Joseph’s movement.

“If everybody knew about RAK and practiced it, then UM would be a much more awesome and friendlier place,” Hill said. 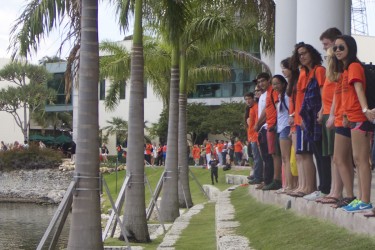 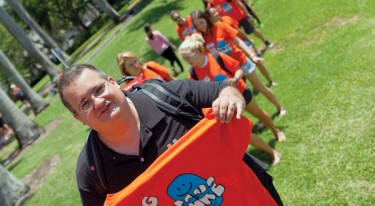