I’m not going to make too much of a tough game for Jacory Harris against Florida State. He went up against one of the best pass-rushing teams in the nation, who also have playmakers in the secondary like Lamarcus Joyner. It also doesn’t help that whenever he would get into a bit of a rhythm, he would get swapped out for Stephen Morris to change our offense entirely from a pro-style with Harris to a spread look with Morris. While B.J. Daniels is developing into a formidable dual-threat, he’s still not as polished as Harris. A scan through Daniels’ stats appears impressive, but he hasn’t had to face the defenses of FSU, OSU, VT and GT like Harris has.

I’ll take the combination of Lamar Miller and Mike James any day over Darrell Scott and Demetrius Murray. James, although more of a balanced back than a goal-line back, has really developed a nose for the end zone and has been called upon in short yardage situations. Miller is still the king in this backfield, eclipsing the 1,100 yard mark last Saturday. With solid games against USF and Boston College he could easily find himself with 1,400 yards by the year’s end. The Bulls’ Scott and Murray have not combined for as many rushing yards as Miller himself.

South Florida’s receiving corps is much younger and less experienced than that of the Canes. South Florida doesn’t have any big target comparable to Tommy Streeter. Streeter came out of the Florida State game a little nicked, but Al Golden says he should be fine. Laron Byrd, after making a few catches in Tallahassee has surpassed Allen Hurns, who had a rough evening Saturday, on the depth chart. I really liked the touchdown catch by Clive Walford that was just thrown up for him to go get over the smaller defender. The leading receiver for the Bulls is a sophomore and former high school teammate of Stephen Morris at Pace, Sterling Griffin.

Penalties on the offensive line came back to bite Miami for the first time in a while. After a couple of false starts that marked hindrances in Cane drives, Jonathan Feliciano will no longer start at right tackle. He’ll be replaced at that position by Sentrel Henderson, who was slowly but surely working his way back into action since coming back earlier in the season from back surgery. Both tackles, Feliciano and Brandon Washington, struggled against the Florida State ends. Neither line on either side has given up many sacks this season.

Two guys in particular for the Canes impressed me last week: Micanor Regis and Olivier Vernon. Regis got his hands up on two passes during the game, had a sack and 2.5 tackles for loss. He earned his playing time back after the one-game suspension. Vernon was in on several tackles himself and is now starting at left end for good. The lack of depth at defensive tackle has hurt this unit for the Canes all season, but they are making due with Darius Smith and Adewale moving from the outside to the interior. The Bulls are impressive up front. They have big, athletic linemen that can rush the passer, led by sophomore end Ryne Giddins. He’s always around the ball and containing his side; he’s registered 5.5 sacks on the year and has forced two fumbles.

Vaughn Telemaque had a nice game leading the team with seven tackles, but when a safety, the last line of defense, is the team’s leading tackler, that’s either an indictment on the seven guys in front of him for not getting to the ball carrier first or the secondary giving up too many catches. Jimmy Gaines has underperformed in the middle all season. Freshman Denzel Perryman, who doesn’t even start, has nearly as many tackles as Gaines has on the year. Also, most of Gaines’ are assisted tackles, meaning he’s either getting to the ball carrier late or requires help from another defender when bringing his man down. Perryman has had more tackles of the solo variety. It was interesting seeing Marcus Robinson work in with Kelvin Cain at strong side linebacker with Jordan Futch out. Ray Ray Armstrong returns to team activities after suspension but is not yet cleared to play. All three South Florida linebackers, Michael Lanaris, Sam Barrington and Devekeyan Lattimore lack the intimidation in size but are solid tacklers. Senior Bulls safety Jerrell Young has picked off two passes this season.

Miami usually gets the special teams advantage in my book. Jake Wieclaw’s a high percentage place kicker, Dalton Botts can flat-out boot it punting-wise, and Travis Benjamin is usually reliable in the return game. But what this unit displayed this past Saturday was absolutely atrocious. Benjamin, a senior who should know better, tried to field a punt that had taken a Florida State bounce with a Seminole on his tail and ended up muffing it, Spencer Whipple pulled a Tony Romo trying to hold an extra point down, and the punt coverage unit gave up the punt return touchdown to Greg Reid on a ball that bounced in front of him. Too many miscues and game-changing plays from special teams; it has to get fixed.

It’s ignorant to get on Al Golden for being 5-5 through the Canes’ first ten games. He has only had one recruiting class that he can call his own, and that class was mustered together over the course of a couple of months after his predecessor, Randy Shannon, left the program’s recruiting state in shambles. But there are things that he can control that he can do better. I disagree with the swapping of Harris and Morris in and out. Harris was driving the offense from the Miami one-yard line all the way into the red zone and all of a sudden he gets pulled to run the spread with Morris. I could understand arguments saying that he has to begin to look toward next season, when Morris will be a junior and Harris will no longer be eligible to play collegiately, and work Morris in a bit, but you don’t do that in a rivalry game against Florida State.  I do expect to see more of the same in the final two games of the regular season though. 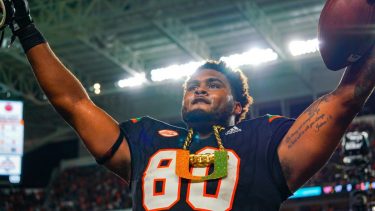 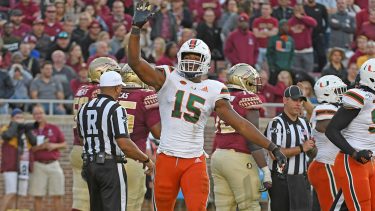 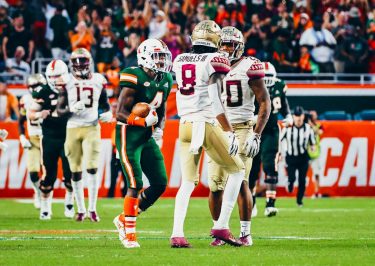