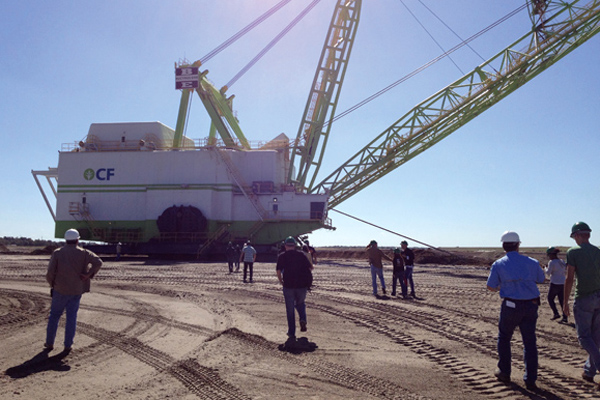 Graduate students in Richard Weisskoff’s economic development class drove to Hardee County over the weekend to investigate the effects of mining on the environment.

Located in central Florida, Hardee County is known for its rich agricultural resources. However, it may soon face the same fate as Polk County to the north, where acres of land have been destroyed after years of phosphate mining.

Phosphate is a nutrient used in fertilizer, which allows for agricultural production that feeds people around the globe.

Weisskoff and his class, which is part of the Department of International Studies, studied the potential damage of mining first-hand.

“It seemed pretty important to Professor Weisskoff that we go there and make the three-hour trip to see what’s going on,” senior Grace Clement said.

The two main mining companies in the county are CF and The Mosaic Company.

Recently, Mosaic, which is the world’s leading producer and marketer of concentrated phosphate, purchased land in Hardee County. The company has plans to mine the area. However, local landowners are unhappy about the destruction of the land, according to senior Bunny Sandefur, a student in Weisskoff’s class.

Weisskoff, who has been studying mining in Hardee County for three years, believes the area is faced with a dilemma. It is a poor county that lies over rich, lucrative deposits of phosphate, but its natural fertility also supports major agricultural endeavors.

“If they allow the companies to mine the phosphates, they will destroy the land, which is a source of jobs for the next 100 years,” he said.

The students visited the facilities of CF Industries, a smaller-scale company, because Mosaic would not allow anyone on their property. Weisskoff said he thinks that Mosaic has “a lot to hide”.

CF employees gave an hour-long presentation, outlining the process of strip mining for phosphates and demonstrated operation of the machinery.

Students asked the CF representatives about how safe it is to mine the land and what happens to the land afterward.

“They had an answer for everything,” Clement said. “We were told by our professor that they would probably have an answer for us and appear very trustworthy, but they’ve been doing this for a very long time.”

Students were left with an unexpected feeling after visiting areas of land that were restored to the way it was before  mining.

“It was surprising to see how good it looked because we all expected nothing to be able to grow after it was strip mined,” Clement said.

They had planted trees to try to bring it back to its natural state, Sandefur said.

Clement said that she was most impacted by the contrast she saw between the “vast” industrial machinery at the mining plant and the “small-town mentality” of the farmers.

“My goal was really just to get their feet wet,” Weisskoff said. “If they came back with curiosity, that’s good.”

The trip raised many questions for the students, who remain concerned about whether this type of economic development benefits the community or hinders long-term sustainability.