Seniors Ethan Kasnett and Jenna Rubaii and sophomore Brandon Beaver, students in the University of Miami Theatre Department rehearse the opening number of 54 Forever, a new musical about legendary nightclub Studio 54 that is conceived and directed by Tommy Tune. The show opens on Wednesday, November 9, and runs through November 19 at the Jerry Herman Ring Theatre. Katie Sikora//The Miami Hurricane

On Wednesday, drop the hip hop playlist and gear up for a star-studded night in the world’s most popular disco club, Studio 54.

The Jerry Herman Ring Theatre’s newest production, “FIFTY*FOUR*FOREVER,” tells the story of Steve Rubell whose dream was to open a disco club. Rubell could not have anticipated that his efforts would soon put New York City’s 54th street on the map.

The play is an original musical directed by nine-time Tony award winner Tommy Tune and created by writer Mark Saltzman. It will make its world debut at the Ring Theatre on Wednesday.

“We’ve taken the idea of Studio 54 and put it through a kaleidoscope,” said Junior Nicholas Ley, who plays the late pop artist Andy Warhol. “It’s a beautiful, colorful, yet, slightly warped view of the reality of the disco era.”

Chair of the Theatre Department Henry Fonte said that the appeal of FIFTY*FOUR comes from its rags-to-riches story set in an interesting historical backdrop.

“The play is about a record of time and a go-getter who puts this together from nothing,” Fonte said.

Fonte also explained that Studio 54 acted as ground zero for “everybody who was anybody.” Artists, celebrities and writers frequented the disco haven. Notables include Andy Warhol, Liza Minnelli and Michael Jackson.

“This play is interesting because one starts with real people,” said junior Brain DiRito, who plays fashion designer Calvin Klein. “I had to bring his traits to develop the character instead of creating it from the script.”

“Warhol is a conundrum, wrapped up in an enigma,” Ley said. “Having to portray a man who is famous for showing no emotions is incredibly intimidating but rewarding as well.”

Having the director, choreographer and co-director David Gibson and writer present helps the actors understand the characters they are portraying, DiRito said.

“Working with Tune has been great. He is always trying to find what works and helping us find what [the actors] require,” DiRito said.

For more information, visit miami.edu/ring
IF YOU GO:

Price: $10-$22. 34 free tickets are available to students per performance.

FIFTY*FOUR*FOREVER premieres Wednesday and runs through Nov. 19. Tickets can be purchased at the box office or online. Student discounts are available. And the Ring is offering 34 free tickets per performance for UM students with ID. Sitting on “stage seats,” they will be near the action on special Studio 54 cushions. These are only available at the box office. 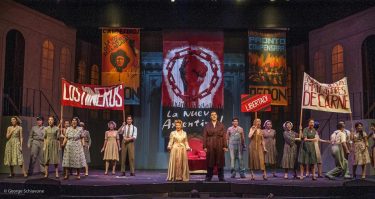 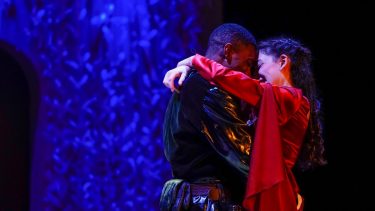