Two University of Miami alumni are driving a hard bargain with their recent startup DealHomer.com, a website that recommends local deals to members.

Launched in May 2011, the Miami-based website was founded by Fadi Bahri and Tarek Murad. DealHomer differentiates itself from other online competitors by featuring deals from affiliate websites such as Groupon, Townhog and LivingSocial in one place.

“We were getting flooded by daily deal emails, so we decided to consolidate everything onto one site,” Bahri said.

Both graduates of UM’s School of Engineering, chief executive officer Bahri and chief operating officer Murad teamed up in December 2010 to put their plans in motion.

“It took a lot of hard work and perseverance to get here,” Bahri said.

Launching the site also required discipline, a skill that Murad said was learned while attending UM.

“We are growing exponentially. Before we had 11,000 deals, so we have tripled recently,” Bahri said.

There are more than 200 sites in the industry that also offer daily deals, Murad said.

“We partner up with [these websites] and become affiliates, but we acquire our own member and subscriber base,” Bahri said. “Every time someone clicks, we get a cut of the profit.”

DealHomer is free and caters to 350 cities in the U.S. and Canada. Members can browse deals in categories like spa or sporting events in cities from Los Angeles to Little Rock. They plan to eventually expand DealHomer overseas, Bahri said.

Bahri and Murad are also currently working with the technical company InterTrust to launch a mobile application. The application will allow users to locate deals based on their current location, history of deal purchases and personal preferences. For example, if a DealHomer member is at Dadeland Mall, they will be able to see the deals available within a certain radius of the mall.

DealHomer is currently looking for funding to increase its number of members and services.

“We would love our University of Miami fans and family to support and enjoy the service we are providing for free,” Murad said. 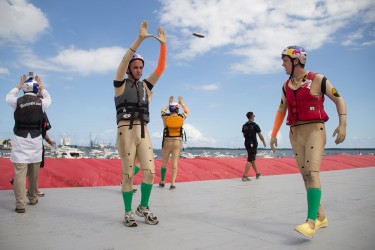