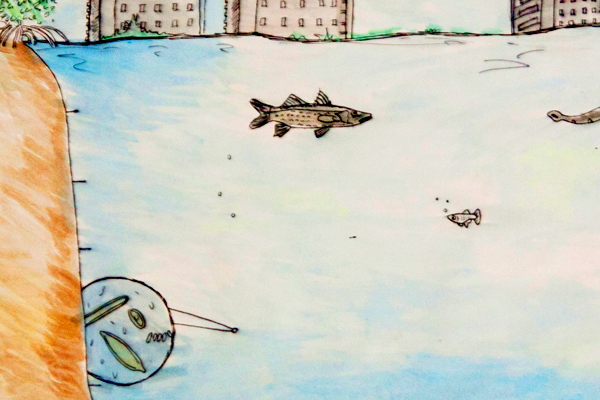 An occasional splash or a sunbathing turtle hint at life beneath the surface of Lake Osceola. The man-made Osceola, located at the center of campus, is ultimately connected to Biscayne Bay by a series of canals, which also fill the lake. Named after a Seminole chief in 1926 by UM’s Iron Arrow Honor Society before it was a lake as it is today, the dredged-out lake is 64 years old. Here’s a look at what’s lurking in its depths.

Osceola supports a number of fish species; from mullet and jacks, which are commonly seen jumping above the water; to mosquito fish, found along the edges of the lake; to various cichlids, which nest in the canal bisecting the freshmen towers.

Why do the mullet and jacks jump? Unfortunately, this question isn’t easily answered.

“I think the mullet jump to avoid predators that chase them to the surface and the jacks jump going after the mullet,” said Dan DiResta, a biology professor with a concentration in conservation and restoration biology.

However, Donald Olson, a physical oceanography professor, has noted that although other fish jump to avoid predators, the ones in Osceola jump vertically. This would not be an effective means of avoiding predators. Instead, he believes that jumping helps remove parasites. Neither theory has been proven.

Not all the fish are friendly. Barracudas can be seen feasting on the cichlids’ nests. Other predatory fish include snook and tarpon.

“The lake is interesting in the sense that it is brackish and supports both fresh and saltwater species,” Olson said.

Water moccasins, also known as cottonmouths, are venomous snakes, whose bites can be fatal. The semi-aquatic viper is known for being aggressive, and for its ability to swim in calm waters. If threatened, it may aggressively approach and latch onto the intruder. It is often seen near the east side of the lake and can be identified by its distinctive triangular-shaped head.

Junior Cory Hood, who is majoring in ecosystem science and policy, spotted one amidst the rocks beside Eaton Residential College last spring.

“I thought it was a little disconcerting that it was on campus. I’m now hesitant to walk near the area, or when I do, I always keep my eyes open, just in case,” she said.

Although once commonly seen sunbathing in front of the Rat, alligators and crocodiles are now rare. This may have been the result of UM installing bars across the culverts, which are the circular structures that channel water. Unfortunately, this addition also restricted access to manatees, which no longer call Osceola their home.

Endangered American crocodiles have also been spotted. A few years ago, two lived in the lake. In 2008, however, local high school students killed and mutilated one of them. The body was found without a head or tail. The students have since been prosecuted.

Plant life includes benthic algae and phytoplankton, which give the water its green coloring. The heterotrophic, or non-photosynthetic, bacteria in the lake can be identified by the rotten egg smell they emit. An overproduction of the phytoplankton, and their ultimate decomposition, results in the lake’s oxygen depletion.

“The problem is caused, in large part, by the fertilizer run off from the campus lawns and from the golf courses up stream on the Coral Gables waterway,” Olson said.

Oxygen bubblers have been installed at either end of the lake in an attempt to counter the problem. Cobb fountain, located at the heart of the lake, also helps to oxygenate the water.

“The lake is aerated … to mix the bottom water up to the surface and prevent the bottom from becoming anoxic,” DiResta said.

Scattered along the shore, red mangroves provide a shelter for aquatic life and are vital for stabilizing the shore. Tall arching roots, known as prop roots, distinguish this species and provide air to the roots anchored beneath the water. In other spots along the lake, the placement of rocks maintain the shoreline in their place.

During the rainy season, salinity levels can drop to below 15 parts per thousand, which is common for brackish waters, like estuaries.

According to Olson, however, the lake can also become as salty as the ocean during extreme drought periods.

UM hopes to stunt macro-algae growth and remove trash by sweeping the surface of the lake with a small motorboat.

“It is not clear if this is very effective since it disturbs the bottom sediments and adds to lake turbidity,” Olson said.

Olson has also noted the application of what he believes to be herbicide along the shore. Facilities Administration personnel have not confirmed this.

Although bird populations have seen a reduction in recent years, wading birds such as herons, egrets and gallinules can still be seen.

The American white ibis, UM’s mascot, can be distinguished by its curved, burnt-orange beak. Juvenile ibises have brown plumage. The species is known for being the last living creature to take cover before a hurricane hits, and the first to return when the storm passes.

Muddy sediment sits on the floor, which rises slightly at the center and is surrounded by freshwater algae.

According to DiResta, this slight rise is a result of all the years of UM’s traditional boat burning, which occurs during Homecoming.

Tides occur twice daily and cause a one-foot depth change. There is also a seasonal tide, contributing an additional foot annually – water levels are highest in October and lowest in April.

Most of the lake is only one or two meters deep.