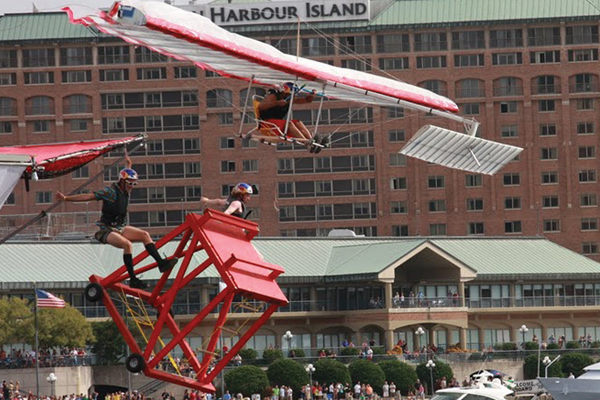 Red Bull’s annual Flugtag event was held on Saturday at the Tampa Bay Convention Center, where the American Society of Mechanical Engineers (ASME) represented the University of Miami in competition.

Flugtag, which means “flying day” in German, requires competitors to build a homemade flying machine that is powered by humans. The contraption is then pushed off of a 30-foot high deck in the hopes that it will fly. More than 35 teams participated in the event and a team from St. Petersburg, Fla., took home the grand prize.

This was the second year that ASME competed for the Flugtag title. The UMiami Hurricane Engineers created a flying machine in five days for the competition. The machine weighed about 500 pounds and measured 12 feet tall. The wingspan was originally 30 feet, but was cut down to 25 on competition day because of gusty winds. Each team was judged on flight distance, creativity and showmanship. The event is not only a competition, but also a lively show for the audience.

“The teams set up inside a staging area and entertain the spectators while they wait to launch their machine,” said Tom Knight, the captain of this year’s team. “Then, the spectators vote on the gliders they like best via text message.” The teams are encouraged to dress in costumes and decorate their machine according to the theme they are representing. The Hurricane Engineers dressed as South Beach lifeguards. “We had a caped kid running around, a photographer, a tourist, snorkeler, various sunbathing girls, and one of the flight crew members was wearing a bikini and was a dude,” Knight said. “The machine had a red lifeguard stand and was painted to look like a rescue paddle boat. It was pretty simple because we were more concerned about the function.” Knight mentioned that there were a few teams that went above and beyond with the themes.

“There was a Willy Wonka team that had people dressed up as oompa loompas,” he said. Knight said the competition was fun even though they did not win. “The team was about 20 mechanical and aerospace engineers from ASME,” Knight said. “We still don’t know our score.”

President of ASME, Mariah Szpunar, said the experience was awesome and the team had a great time. “Flugtag was a chance for us to live out the days of Da Vinci when man first sought to take the skies,” Szpunar said. “If they had as much fun as we did building and making a splash, perhaps flight would have been invented before the Wright brothers.”

The team’s loss will not discourage ASME from competing in the Flugtag event next year.