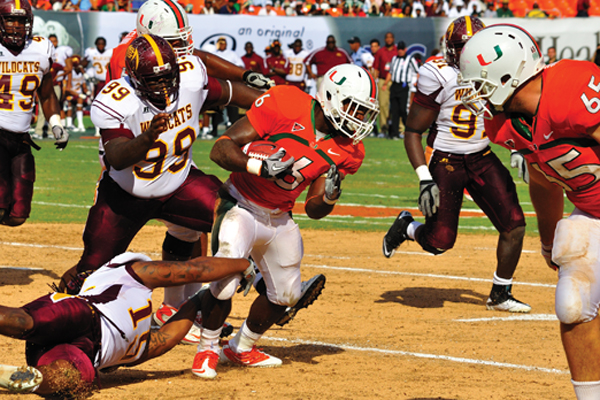 I say this skeptically, but quarterback play has actually been one of the Hurricanes’ strengths, and criticism of Jacory Harris throughout the team’s three-game home stand was drastically unjustified. Harris is completing 69 percent of his passes and has thrown twice as many touchdowns as interceptions. Virginia Tech’s Logan Thomas has only thrown more touchdowns than interceptions in a game once this season, and it came against Appalachian State. We’ll have to see how Harris’ numbers hold up playing in the hostile environment of Lane Stadium in Blacksburg, Va.

The Hokies’ David Wilson is currently the ACC’s leading rusher, while Lamar Miller ranks third on that list, but Wilson has had five games (and 31 more carries) to Miller’s four to establish his mark. Miller has a better yards-per-carry average and has rushed for at least 100 yards in all four of his games. Recently it’s been a whole lot of “Dash” for Miami and not much “Smash,” as Mike James has seen a significant decrease in his workload. James, after receiving 24 carries in the first two games, has only been handed the ball five times since. Virginia Tech’s Josh Oglesby complements David Wilson but had a lackluster game against Clemson last week, rushing six times for just one yard.

Logan Thomas spreads the ball around and gets a lot of his receivers involved. The Hokie receiving corps is headlined by Danny Coale and D.J. Coles, the team’s two leading receivers. A lot of their receivers’ statistics may appear inflated, however, as the only legitimate team they’ve faced to this point is Clemson. Harris has developed some solid rapport with his group of receivers, specifically Tommy Streeter, his high school teammate at Northwestern. Miami’s receivers are more skilled than those of Virginia Tech. Laron Byrd looked to be a major contributor coming into the year, but now is nowhere to be found. Where did he go? #thingstoponderatnight

While this is the offensive line that blocks for Lamar Miller’s incredible runs, much too often Miller is getting hit before he reaches the line of scrimmage. The Canes’ offensive line was expected to be a strength, but when Miami was stuffed on short-yardage downs to Bethune-Cookman and lost to Kansas State because they couldn’t pick up two yards on four plays, you have to start to question that. Having big Seantrel Henderson back healthy could be a huge boost for this group. Virginia Tech’s offensive line is considerably smaller than Miami’s, and they’ve also given up more sacks than the Canes.

Miami’s defensive line is kind of in shambles. They’ve found it difficult to stop the run and are not plugging up the holes in the middle. The team gave up an inexcusable 219 rushing yards to Bethune-Cookman. With sophomore defensive lineman Curtis Porter now out for the season with an infected, broken finger and the team searching for options in the middle, Adewale Ojomo made the move to defensive tackle at an undersized 270 lbs. The Canes have good pass rushers on the outside with Marcus Robinson, Anthony Chickillo and Andrew Smith, but as the old adage goes, you have to stop the run before you can have fun. This unit could really use Olivier Vernon, who will return from suspension after the two-game road trip. Bud Foster’s Virginia Tech defense, on the other hand, is always really tough on opponents and it all starts up front. It’ll be a big challenge for the Canes’ offensive line to get the push to give their backs room to run and to protect Jacory Harris.

The last thing Miami needed was an injury at linebacker, but that’s exactly what happened- strong side linebacker Ramon Buchanan has been ruled out for the season with a right knee injury. We’ll see a combination of Jordan Futch and Kelvin Cain working to replace him. A huge comfort to Hurricane fans will come in the form of safety Ray Ray Armstrong’s return from suspension. Vaughn Telemaque and Jojo Nicolas are still listed as the two starting safeties on the Canes’ depth chart as they look to ease Armstrong back into action. The Hokies have playmakers all over the defensive side of the ball, but two key players to look out for are linebacker Bruce Taylor and safety Eddie Whitley.

For Virginia Tech, all that needs to be said is “Beamer Ball.” Frank Beamer always prides himself on strong special teams play, from big returns to strong kick coverage units to going after kick and punt blocks. Jake Wieclaw is still perfect on the season with his kicks for the Canes. A big return from Travis Benjamin in this game might be the X-factor Miami needs.

Al Golden is up and coming, but Frank Beamer is already an established legend in the college football ranks. Would anyone know what hokies are had Beamer not put this program on the map? They’re turkeys, by the way. Golden has been playing amplified sound samples of turkeys gobbling at Greentree to get the Canes prepared for the road environment, but it’s also worked to get the team to hate their opponent. Said running back C.J. Holton on Twitter, “that was so annoying.”