Parking spaces come at a premium, especially with the new zones that limit the number of people allotted to each lot. The School of Communication parking lot has few spaces available at noon for students just coming to campus. Cayla Nimmo//The Miami Hurricane

In response to amounting complaints about a supposed lack of parking on campus, the Department of Parking and Transportation has developed a new parking system which was implemented at the beginning of the fall semester.

Students, faculty and staff with cars are now required to park in one of six zones around campus distinguished by color. Drivers are then obliged to park in their one designated zone during the day. Parking zones are enforced until 4 p.m. during the week and on weekends.

Now, a week after the new parking system was implemented, the University of Miami’s driving community is filled with mixed reviews.

“It’s largely the same for me,” said junior Nicholas Ley, a commuter student who parks in the yellow zone. “I park behind the [BankUnited Center] … and on average, the lot is a little fuller than last year.”

However, Ley does not think the new parking system solved anything.

“Yes, parking Is limited. But what other solution is there than to just build more spaces?” he said.

According to Richard Sobaram, director of the Department of Parking and Transportation, there definitely was a problem with the old parking system, but it was not a lack of spaces.

“We had 900 empty spaces on campus while people were fighting for spaces and complaining about there being no parking,” he said. “Now, parking is more distributed.”

In previous years, drivers could start their days parking in what is now the red zone, the area at the academic core of campus, by the School of Communication, Memorial Building and Learning Center. Now, those people are forced “to drive to campus, park once and [not] move until you leave campus,” Sobaram said.

Consequently, because drivers are being forced to choose one parking area, the spots in the yellow zone closest to the University Center and other surrounding buildings, the area with the most amount of parking spaces, fill up very quickly, even in the early morning hours.

“The worst is driving all the way to the top of Pavia [between 9 and 10 a.m.] to find that it’s full,” senior commuter student Patrick Azcarate said. “The main situation is that I’m forced to park in [the Serpentine lot] that last year cost half as much money.”

Sobaram said that, after about 9:30 a.m., there are still about 300 empty spaces in the yellow zone, but parking there requires a longer walk to campus. But many drivers are unaware of many of these open spots, which include the top floor of the Mahoney/Pearson parking garage and the lot across from the Wellness Center and behind the BankUnited Center when the gate is open.

“Folks who arrive to campus around 9:30 a.m. are pushed further into the yellow zone, which is exactly what we want because they’re utilizing the spots that have remained empty all these years,” Sobaram said.

In general, drivers who park in the red and purple zones are much more satisfied with the new parking system in comparison to those with a yellow zone parking pass.

“I never really had a problem with [parking] last year except on Tuesday’s I had to pay meters sometimes when I was late to lab, but I always find parking in my zone this year – it’s great,” said sophomore Jennifer Rodriguez, who commutes 45 minutes to campus from Pembroke Pines.

Faculty and staff members, who were the first to be able to choose their parking zones, are also feeling the brunt of the new parking system, and the levels of satisfaction across the parking zones are comparable to students’.

“I asked around the office and so far everyone agrees that it’s been fine, no one has encountered any problems finding a parking spot either in the morning or on the return from lunch, if they’ve moved their car,” said Maria Lopez, the senior administrative assistant for the Office of Advancement and External Affairs at the School of Communication who parks in the red zone.

Some problems, some solutions

Still, the new parking system leaves some student employees to feel trapped on one side of campus or students who carry many books from class to class to rely on their cars as lockers, frustrating results for those who do not want to trek across campus so many times a day.

“I am not afraid of walking and getting some exercise, but the fact that I have to carry a lot of books to class and a heavy load every day all the way across campus, that I have gotten late to class twice because I can’t park directly in the red zone, and the fact that the shuttle service has not improved upsets me a bit,” said senior commuter Claudia Cruz, who parks in the yellow zone.

According to Sobaram, though, the efficiency and speed of shuttles across campus is improving. Before, 75 of the 200 students getting out of classes in the Flipse Building at the same time would get into their cars to drive to their next class and park in the Pavia garage  or at the School of Communication.

“I’ve timed it in between classes,” Sobaram said. “Shuttles have a hard time getting out of Ponce garage but because 75 people are getting out and causing a traffic jam.”

By not allowing the constant movement of drivers across campus, the new parking system has been able to decrease the amount of inter-campus traffic.

“Even though we know people are angry – I have had students cry, parents scream at me on the phone – at the end of the day most people are rational people,” Sobaram said. “It’s a better system for the general good of the university, and most people do understand that argument.”

Student Government is hosting its first “SG Comes to U” event, which was one of “Taking U Forward’s” platforms, specifically focused on parking and transportation. The event, which is open to all students, faculty and staff, will take place Sept. 13 at 3:30 p.m. in the International Lounge of the UC. According to SG Press Secretary Mike Piacentino, Sobaram will be present to field questions, but the conversation will mostly be driven by those in attendance.

“Parking affects commuters, so we want commuters to attend this,” said Student Government Vice President Ashley Taggart, who is a commuter. “They’re going to want to say what problems they have with parking.  It’s a transition year, but hopefully they fix the problems that we have.

Taggart, for instance, thinks the yellow zone should be divided into a few sections and that the discount parking should be larger.

As a prelude to the event, SG organized an online Facebook question titled “What is your opinion on UM’s new parking system?” As of Wednesday night, 75 percent of the 138 students that voted said that the new parking system is “worse than last year.” Students also have the opportunity of expressing why exactly they like or dislike the system beneath that poll.

The yellow parking zone is comprised of the lots in front of Mahoney Pearson Residential College all the way west to the Wellness Center lots. The red zone is the second largest parking area and stretches from the School of Business past the Memorial Building. The purple zone begins in the lots behind the intramural fields and extends to the School of Music and also has a lot behind the Ungar Building.

After analyzing data from surveys and taking into account the UM community’s parking worries, the Department of Parking and Transportation decided that parking zones would be the most efficient solution. Building a parking garage near the academic core and another one by the UC, a project which would cost about $15 million, was out of the question.

“I’ve seen parking from both sides – as a student and employee. I know the university from inside and out and I’ve seen it from different perspectives,” said Sobaram, who has two degrees from UM. “We could use that money to make our degrees more valuable.”

The new parking system does not affect current permit costs. A full-year parking permit costs each student and faculty or staff member $444. Drivers also have the option of choosing the green zone, which includes Ponce Garage and the surface lots under the metro rail across from the baseball stadium. The green zone is specifically for discounted parking permits and costs $226.

Bachmann visits Florida to reel in support
Green and clean 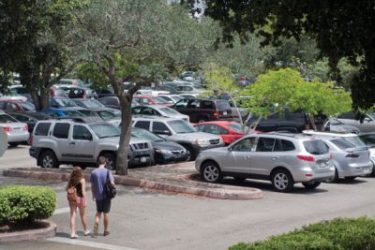 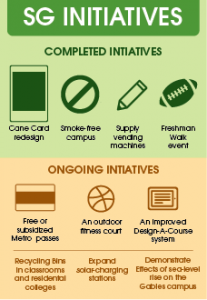