The stories and struggles of Cuban immigrants are being locked away in history for future generations to see and hear.

The Luis J. Botifoll Oral History Project is a digital archive of Cuban history being collected at the Cuban Heritage Collection in the Richter Library. The oral history project aims to preserve Cuban heritage by recording the undocumented history and experiences of Cubans through audio and video interviews. The project, which was launched in April 2008, will provide access to the personal experiences of Cuban immigrants during and after leaving the island, as well as a window into firsthand accounts of the culture, history and exile experiences of those who witnessed the Cuban revolution.

In one interview, Bernardo Benes, a Miami banker born in 1934, recounts how he felt when he arrived in Miami during the Cuban exile.

“I remember when I arrived in Miami, I came alone on the airplane. I was already married with an 18-month-old son. It was a Friday and it was a terrible day: the terrible anguish of not having anyone, not being able to speak with anyone, having left everything behind,” Benes said in Spanish.

Benes is best known for leading a group of Cuban immigrants to participate in the 1978 dialogue between the Castro regime and exiled Cubans.

Other interviewees include Cuban-born sculptor Tony Lopez, former political prisoner Albertina O’Farrill and Francisco Tabernilla, chief of staff of the Cuban army at the time the Batista government was overthrown. Esperanza Bravo de Varona, the chair of the Cuban Heritage Collection, believes that the primary sources in the oral history project are a huge addition to the already impressive collection.

“It is a very good collection to serve students, faculty and researchers not only at the University of Miami but the whole world,” de Varona said.

The project includes 43 interviews of political prisoners, visual artists, community activists and other Cuban citizens who were exiled from Cuba after the Cuban Revolution, most of whom are over 70 years old.

Gladys Gomez-Rossie, the community relations coordinator at the CHC, thinks it is an important piece of history because it sheds light on the reality of the experiences in the highly politically-censored Cuba.

“It is not really what the books or Cuban newspapers were saying,” Gomez-Rossie said.

Luis J. Botifoll, the man for whom the project is named, was considered a leading figure by the Cuban exile community. He was a trustee of the university and a founding board member of Amigos at the CHC. Located on the second floor of the Richter Library, the oral history project is one of the newest exhibits in the Cuban Heritage Collection at UM. According to Maria R. Estorino, the deputy chair and chief operations manager, 11 of the interviews can also be seen online through the Cuban Heritage Collection website and many more will be available soon.

“We have a commitment to make [the interviews] available with a couple clicks of a button,” Estorino said. 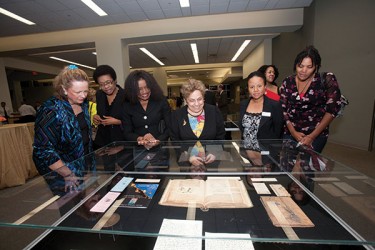