Remember back in elementary school, or maybe even in middle school, when they made you take chorus class? For many, it may have seemed like another mundane and mandatory class, one in which you half-heartedly mumbled out words to songs that only your parents would truly love to hear. But for others, chorus class allowed them the chance to indulge in one of their true passions – singing.

Some University of Miami students have been cultivating that passion by participating in one of the many chorale groups offered by the Frost School of Music.

“Actually, when I was about four,” said Tristan. “I only started singing chorale music in high school, my junior and senior year, and when I got to UM I realized that I liked it a lot and I chose it as a minor.”

Steven Stuts, who graduated in May with a Bachelor’s degree in vocal performance, began singing at an even younger age.

“I started singing when I was two years old, as soon as I could speak, and I’ve been singing ever since,” Stuts said.

Joseph Pak, a sophomore majoring in math with a minor in vocal performance, learned how to sing from his mom when he lived in Korea as a child.

“My mom was a musician who specialized in teaching the blind back in Korea, so I learned from my mom at an early age,” Pak said. “I didn’t start pursuing music until high school and have enjoyed it so much that I chose it as a minor here.”

Despite each of their unique musical upbringings and age differences, their love of music has brought them together.

Pak, Stuts and Montaque are each in the Maelstrom choir class, which is one of the five choir ensembles offered by the Frost School of Music.

Stuts cites the diversity of the students that participate in Maelstrom as one of the major differences from his previous singing experiences in high school.

“One thing that’s different in an ensemble like this is that you get people from all different majors, not just music majors, and you get to meet people that you wouldn’t have otherwise,” he said.

Alumnus Thomas Cochran agrees that, while he was a member of the chorale, another of Frost’s five choir ensembles, the connections he made were unique and lasting.

The Maelstrom (men’s chorus) and Cantellina (women’s chorus) choirs do not require auditions, but the symphonic, UM Chorale and chamber singers must audition.

According to Cochran, every year the singers must partake in a singer’s skill test as a sort of re-audition.

“The repertoire of the two groups is also different. Symphonic Choir focuses mostly on symphonic choral pieces while UM Chorale has a wider scope of repertoire,” Cochran said.

Montaque, Stuts, Pak and Cochran all looked forward to chorus class as a breather from their otherwise hectic schedule.

“I look forward to class as a time where I can focus on creating beautiful music,” Cochran said. 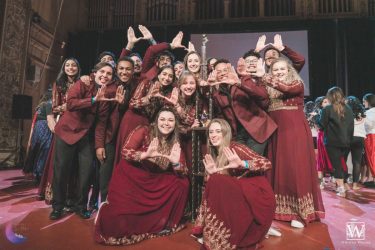