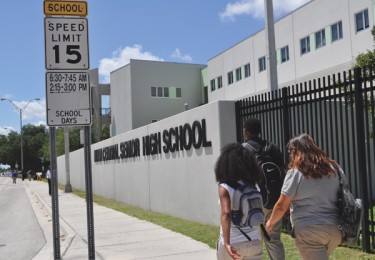 It wasn’t too long ago when Miami Central Senior High was considered the worst academic school in the state of Florida. From 2003 to 2008, Miami Central was rated as an “F” school based on student FCAT scores.

On the verge of being shut down by the state, the Miami-Dade school district opted for a different route: new principal, new teachers and a strong partnership with a national organization called Teach For America.

“There’s definitely an impact that Teach for America makes,” said Mary Avalos, a professor in the School of Education who works with Teach for America. “It puts a temporary fix on a big issue.”

Teach For America is a nonprofit organization that brings recent college graduates from top universities, including the University of Miami, to teach at schools in impoverished and at-risk neighborhoods to help ensure a good education for students.

Corps members go through an extensive application process. Of the approximately 46,000 applicants last year, only 4,500 were chosen.

“I think the great turnout has a lot to do with students seeing a need for societal change,” Avalos said. “Teach For America focuses on making societal change through education.”

Members train at a summer training institute headed by Teach for America. Miami Central High School saw an immediate change with the arrival of a new principal and Teach for America employees. Last year, the high school achieved a “C” rating and hopes to earn a “B” this year for the first time in its history. The achievement caught the attention of national leaders.

“The turnaround that has been accomplished here is the reason I wanted to come here,” President Barack Obama said in a speech to students during a recent visit to Miami Central. “It’s sending a message to kids across the country that there’s nothing we can’t accomplish when we put our minds to it.”

“This is a group of people who truly want to be in an urban setting,’’ Charles Hankerson, the principal at Miami Northwestern, told The Miami Herald in an interview last year. “This is where their heart is. Everyday, when they wake up and come to work, they want to be there. That attitude will spill over to the students and to other members of the faculty.’’

Every corps member starts with a beginning teacher’s salary and benefits. The program also helps their employees by deferring their student loans and offering $10,000 toward graduate school, should they choose to further their studies. Their tenure with the corps lasts for two years.

“Whether the student chooses to continue teaching after the corps or not, they will always be great advocates for education,” Avalos said. “I think that’s what’s so great about this program.”