Senior Maria Ronderos has been selected to participate as an individual in the 2011 NCAA Division I Women’s Golf East Regional in Daytona Beach, Fla. Having shot the fourth-lowest stroke average in school history, Ronderos is the first Hurricane to qualify as an individual for regionals since 2003. The competition takes place from May 5-7.

Last Saturday, the Hurricanes were eliminated from the ACC Championships in the semifinal round, losing 4-2 to North Carolina. Senior Bianca Eickhorn set a new school record for career singles victories (132), winning the first point for Miami in the No. 1 singles position. Eickhorn has been named ACC Player of the Year. The Canes next compete in the NCAA Championship Tournament, beginning on May 13. 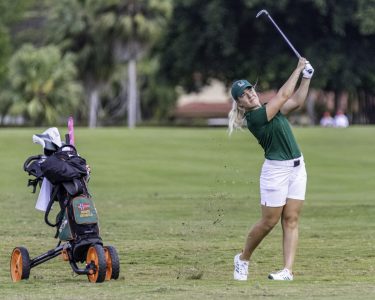