Senior linebacker Ramon Buchanan was arrested early Friday morning on several felony and misdemeanor charges, including resisting an officer with violence and battery on a law enforcement officer.

He has since been put on indefinite suspension from the football team pending further review of the arrest. A court hearing for Buchanan’s case will be held April 18.

The incident, which occurred in Coconut Grove during spring break, is the first arrest of a UM football player since October 2007 when former Cane Robert Marve faced a misdemeanor  charge of resisting arrest with violence. Marve transferred to Purdue in May 2009.

Buchanan had no previous arrests on his record, The Miami Herald reported.

According to the police report filed after the incident, Buchanan allegedly caused a disturbance in a men’s bathroom near Fat Tuesday around 1:30 a.m. When police officers arrived to the scene and told Buchanan to leave, he responded “No. [Expletive] you, I ain’t leaving.”

Although defensive coordinator Mark D’Onofrio has refrained from any comments so far, head coach Al Golden released a statement through the university media relations. In it, Golden stated that he was aware of the situation and was “disappointed” with the news.

“This is out of character for a young man who has been a positive influence in our program,” Golden said. “He is contrite and apologetic for the situation and is currently taking the appropriate actions towards resolution.”

Before practice on Tuesday, Golden addressed reporters for the first time.

“His misstep is unfortunate, but again, I want to make sure we’re all on the same page, that this behavior will not be tolerated, nor will anything that represents the university or alumni or student body in that sense,” Golden said.

Buchanan now joins six other players suspended for the season-opening game against Maryland, which includes starting offensive lineman Seantrel Henderson. The reason for their suspensions is rumored to be infractions against team rules.

“We’re very proud of our track record here,” Golden said. “We’ve had the best track record in the state of Florida with our student-athletes over the last five years, arguably one of the best in the ACC.

The torch has been passed to us and we’re going to do everything we can to uphold the standards and mission of the university.’’ 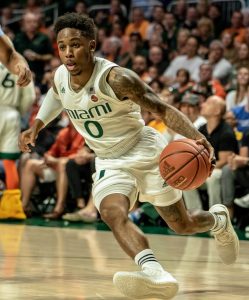 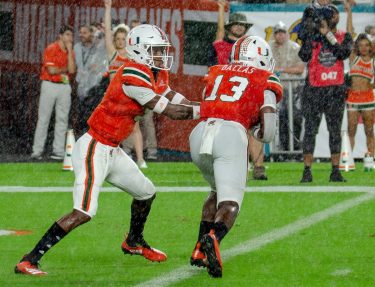