For the first time since 1993 the Miami Hurricanes played consecutive extra inning games.

On Saturday night, however, it was a different result from Friday night’s 2-1 victory.

Rutgers scored the go-ahead run on a wild pitch to beat the 18th-ranked Canes 6-5 in 10 innings at Alex Rodriguez Park at Mark Light Field.

Right-hander Adam Sargent (0-1), who pitched two scoreless innings of relief in the season opener, hit three batters in two frames, including Steve Nyisztor to lead off the 10th. He was the fourth UM pitcher to take the mound and surrendered the winning run.

“I had some sidewinders who didn’t hit people too. We hit some guys today and that can’t be a reason to hit people,” head coach Jim Morris said. “There have been a lot of successful guys for us and in the big leagues [who threw sidearm].”

Following a fielder’s choice, Russ Hopkins advanced to third on Bill Hoermann’s double to left center that dropped between Zeke Devoss and Nathan Melendres. Hopkins would then score on Sargent’s wild pitch with one out.

“That was not great communication by the two of us,” DeVoss said. “When he was going after the ball I was telling him to dive and I wasn’t there. I consider that to be 100 percent my fault.”

Early in the game, it appeared as though the new bats would continue to mystify both teams in a pitcher’s duel.

There were 13 combined strikeouts through the first four innings, including seven for Rutgers starter Rob Smorol. Although the lefty was at times wild, going 3-2 on the first four hitters of the game, he went five innings with eight strikeouts and five walks.

Sophomore righty E.J. Encinosa, meanwhile, had a no hitter through five before giving up a leadoff double down the left-field line to Dan Perrine in the sixth.

Encinosa worked quickly and efficiently, throwing just 18 pitches through the first two frames. He struck out five of the first nine batters.

“I thought he threw really good. Of course he was dominating those first five innings,” Morris said. “His pitch count was fine.”

But the Scarlet Knights (1-1) broke up the no-hit bid in the sixth with back-to-back-to-back hits – Perrine’s double and Brandon Boykin’s single – before Michael Lang’s two-run triple to deep right field. Nyisztor’s sacrifice fly to left tied the game at 3.

“He hasn’t started in high school so that was his first start other than what he’s pitched in intra-squad games,” Morris said.

Miami (1-1) led most of the game, including 5-3 in the sixth off DeVoss’ two-out double into the right center field gap. Rutgers would tie it up at 5 in the eighth with a two-out two-RBI single to left by Hoermann.

Right-hander Javi Salas, seeing his first collegiate action, allowed back-to-back one-out singles and a hit batter to load the bases. It seemed he might get out of the jam when Hopkins struck out looking, but Hoermann took the second pitch into left to plate two.

Hoermann finished 2 for 5 with 2 RBIs for the Scarlet Knights.

“I always think baseball is baseball, so I never take anything as game over,” Michael Broad said. “I always take it till the last out is made and we won because I’ve played too much baseball in my life.”

Broad, whose ball to deep center field was the final out of the game, drove in Miami’s first three runs with an RBI single in the first and a two-out single in the fifth. DeVoss reached base three times for the Canes.

Rob Corsi (1-0) pitched two scoreless innings of relief for the win. The rubber match between Miami and Rutgers will take place Sunday at noon.

“We made some mistakes today and Rutgers has a pretty good club,” Morris said. “We did a lot of little things wrong that made us lose the game. It was a combination of a lot of things.” 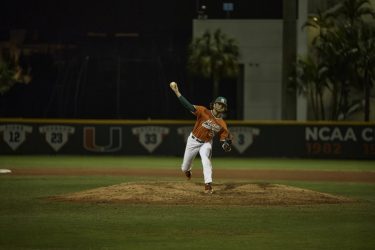