One researcher is diving deep-between 100-150 feet below the ocean’s surface to be exact.

David Weinstein, a geology and geophysics doctoral student at the Rosenstiel School of Marine and Atmospheric Science (RSMAS) spends his days deep under water researching what’s happening to the coral at these depths.

In January, Weinstein was awarded the 2010 Zale Parry Scholarship for his work.

Weinstein focuses his research on the bioerosion process of coral reefs and how it varies in different mesophotic habitats in the U.S. Virgin Islands. Mesophotic habitats are reef ecosystems found in waters with low light and at depths of up to 490 feet.

Bioerosion is the erosion of carbonate substrates, such as coral skeletons. When they die bioersosion reshapes a coral reef. Bioerosion has occurred throughout geologic history, and although it is not new various environmental stressors can have negative effects disturbing the equilibrium of the process.

Parry offered Weinstein the scholarship with a personal phone call, while he was in the U.S. Virgin Islands.

“She called while I was working on the research she gave me the award for, while we were under the direct hit of a hurricane, basically without power,” Weinstein said.

The Zale Parry Scholarship is for $2,000 and was established to recognize students making an impact in the world of aquatic research and seeking to advance their knowledge by entering a professional career in ocean exploration, diving equipment technology, hyperbaric research and marine conservation.

“David is an unusual and special scholar who is very conscientious and dedicated to his field,” Parry said in a press release. “His well-rounded personality and sharp mind impressed all of the scientists and scholars within our academy. I have no doubt that he will be a fine and influential geologist for our time.”

Tyler Smith, someone Weinstein worked with in the Virgin Islands, is glad to see things are going well for Weinstein.

“It has been very rewarding to see him out there, getting started with his project,’’ Smith said. “He has managed to do a very difficult thing- getting experiments deployed in this deeper water- that takes a lot of perseverance.”

Nick Bissel may be contacted at nbissel@themiamihurricane.com. 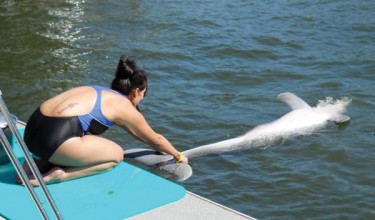