Gables linebacker signs with the Canes Coral Gables Senior High’s Denzel Perryman signed his letter of intent with the Miami Hurricanes on Wednesday. The Miami Hurricane sat down with the 5-11, 217-pound linebacker to talk about getting advice from NFL players to dealing with the recruiting process.

The Miami Hurricane: What was your initial reaction when you realized schools were interested in you?

DP: I was excited, and I kind of got big-headed, but [coach Joe] Montoya talked to me, kept me level headed and told me in the next two years by my senior year all of this is going to be crazy and stressful, and that’s what it turned out to be.

TMH: How do you think you dealt with everything? I noticed random people shaking your hands. You’re like the big man on campus.

DP: It is kind of strange, but then I look at it in a good way. Some people at school look up to me and I keep a good image on me. I’m a good role model to some people.

TMH: Did [current NFL players] Jonathan Vilma or Frank Gore or any of the former Gables guys talk to you?

DP: Yeah. Darryl Sharpton and Vilma talked to me before and they told me to stay level headed and don’t let it get to me because it can all be taken away. They just told me to work hard, in school, on and off the field; be successful.

TMH: The whole recruiting process is crazy. What were some of the strangest things schools tried to court you with?

DP: The most common is you can come in and start early, play early. My brother who went through the recruiting process, said they just say that for you to commit. That’s the main thing.

TMH: How did new head coach Al Golden sell you on UM? I know you have a good relationship with linebackers coach Micheal Barrow…

DP: My relationship with coach Barrow is just a plus and that’s why I committed. Just meeting with coach Golden and him talking with my parents, he’s a real cool guy, fired up, he turned the tempo around. I can imagine what he’s going to be at UM.

TMH: So it’s good that you’ll be in Miami and your family can still go to the games…

DP: My parents have been coming to all my games all my life, since I was playing optimus ball. In college they’re going to be at six games, half a season, but that’s going to be my home games, that’s very important.

TMH: There’s not much depth at the linebacker position. Do you think you can realistically see the field?

DP: I have a chance to come in and start. So yeah, I think so.

TMH: How would you compare your game? Is there a certain linebacker somewhere?

DP: I would just say I’m instinctive. I just see the ball and go. No hesitation.

TMH: Are you excited to play with Sean Spence?

DP: Yeah, I was with him this weekend at my visit. He was my host with [Ramon] Buchanan. I’m very excited even with one year, but it’s going to be a fun year.

TMH: What are those recruiting trips like? What’s your favorite part of campus?

DP: I’ve been around campus since my freshman year, but my favorite part is just going out with the team. We were going out to places and everyone is just walking up to you wanting to take pictures, sign autographs. I like that.

TMH: Did you always want to be a Hurricane?

DP: Yeah, pretty much. That’s like a dream come true now that I committed and I’m going to be going there. Since I was a freshman I’ve just been working to become a Hurricane, and now to have it, it’s a dream come true.

TMH: When did you make your decision?

DP: I made my decision Saturday [Jan. 22], but in my mind I knew that’s where I wanted to be. I was looking at other schools, but in my heart UM was there.

TMH: What do you think will be the toughest transition between high school and college?

DP: No one’s going to be there to wake me up in the morning, tell me to go to class and be on top of me and tell me I need to do this and that. I’ll have to be responsible and good at time management.

TMH: What are you most excited for about college aside from football?

DP: Just going to college and getting the whole college experience and enjoying the college life.

TMH: If you can look back on the whole experience, is there anything you would change or is there a certain moment that sticks out in your mind the most?

DP: I wouldn’t change anything, but the moment that sticks out is when coach Barrow offered me my freshman year a scholarship to UM. I was shocked. I didn’t do anything but stand there and smile and say thank you. I was speechless.

TMH: Is there added pressure when people want you and you know you have to produce?

DP: It was pressure my sophomore year I came out and that’s when I made a name for myself and I just told myself the next two years to work hard and maintain and do a lot better than I did. Now that I made my decision though I’m less stressed.

TMH: Is there anything different you did?

DP: I pretty much got extra stuff in. Extra gas in, lifting weights, extra push.

TMH: A lot of stuff in the summer, in the hot heat?

TMH: Was there ever a time when you were thinking, ‘Why am I doing this?’

DP: Nah, nah, ’cause I love it so much and I’m just going to go through it.

OFF THE WALL QUESTIONS

Song to play before a game: “I Put On” by Young Jeezy

To unwind: I’m just relaxing, laying down, listening to music. I sleep all the time actually.

Ideal meal: Flanigan’s. I eat a lot of fast food. It’s not good for me, but I love it. Ribs, cooked meals, chicken and shrimp alfredo. 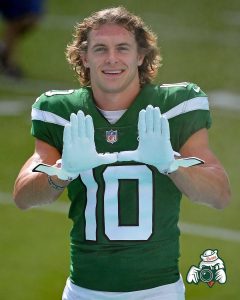