Two weeks after the national search for a new head coach began, the University of Miami found its man.

Temple University head coach Al Golden was officially introduced to the Hurricane community as the new leader of the football program at the Robert & Judi Prokop Alumni Center Monday evening.

“We’re here tonight to celebrate an exciting time and to take the next step in positioning our five-time national championship football program back to the top of the college football world.”

In his speech, Golden focused mainly on two things, one of which he called a promise, and the other a request.

“A promise that our young men on this team, today, right now, will not have a sense of entitlement about the legacy, but will uphold what you’ve created here, a standard that you’ve set,” he said. “And we will do whatever we have to do to make sure they understand that when they turn on the TV and they see Ray Lewis or any of the great players, that they understand the work it took in the classroom, in the film room, on the field of play, on the practice field, and they uphold that legacy.”

He also asked that former players would return to the university and leave an impact on the current squad, whether it be at practices or games.

“Let’s go do this together. Let’s go back to winning championships, bottom line, period, that’s it,” Irvin said. “And I hate to say it, but that’s what matters.”

President Donna E. Shalala and other administrators were also present.

Shalala addressed the issue head on that perhaps Golden’s name wasn’t big enough for the type of impact the program needed after the firing of Randy Shannon.

“This is the big splash that we need. This is not a little splash. This is a big, important coaching hire for us and the proof is in the pudding,” she said. “And each of you will eat your words if you don’t believe that we’re not here to win championships, whether it’s in the playing fields or in the classrooms. We want to be the best. We don’t want to just compete.”

Golden had spent the previous five seasons rebuilding a Temple football program that had not played in a postseason game since 1979 and had gone 3-31 in the three years before he was hired.

Despite a 27-34 record in his tenure with the Owls, Golden’s squad showed steady improvement every season. After a 1-11 record in his first year, the Owls finished with a 9-4 record in 2009, the first winning record in almost 30 years. This season, they went 8-4, but weren’t invited to a bowl.

Under Golden, the program also went through a major improvement in the school’s Academic Progress Rate scores.

In becoming Miami’s new head coach, the 22nd in its history, Golden takes over a program that has not been to a BCS Bowl game since 2003 and has lost 16 of its last 21 games against ranked opponents since 2005.

UM hopes that Golden can be the person that leads the Hurricanes back into “national relevance.”

Other finalists for the position included Connecticut’s Randy Edsall and former Miami law school graduate and assistant coach Marc Trestman, who has been the head coach of the Canadian Football League’s Montreal Alouettes for the last three seasons.

Hocutt told the media that Golden was the only candidate offered the job.

The Hurricanes (7-5) will face Notre Dame (7-5) in the Hyundai Sun Bowl on December 31st. Interim head coach Jeff Stoutland will remain in charge while Golden learns more about his new team and focuses on recruiting. He emphasized his push to recruit in both South Florida and the Northeast.

“It’s a dream job, it’s a remarkable opportunity for my family and I to build championships here, continue the recent success in the classroom and to give back to the community and be stewards in the community,” Golden said. “I think this is just a wonderful, wonderful opportunity, and to be honest with you, I’m the luckiest coach in America today.” 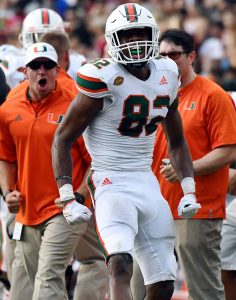