Early Nov. 24, Valentina Andrews Hubsch was confirmed as the driver that struck and killed UM junior Jared Paul Jones Nov. 13 in a hit-and-run accident.
According to The Miami Herald, Hubsch is 45-year-old fashion model from Coral Gables.
“The entire University of Miami community is saddened to learn today of the death of student Jared ‘Paul’ Jones,” read the statement released by UM Media Relations Tuesday morning.
Jones, who was an English major from Maryland and who went by Paul, died Nov. 23 as a result of the injuries he sustained from the accident when Hubsch struck him as he walked along the 4500 block of Red Road. At approximately 7:20 p.m. Nov. 13,  Jones was walking in the roadway to his off-campus apartment from a friend’s house.
“Paul [had] massive head trauma [and had] multiple injuries to other systems,” said Betsy Jones, Paul Jones’ mother, when she arrived in Miami Nov. 14 with her husband Jim Jones. Jones was in a coma until Tuesday.
The Coral Gables Police Department has received a statement from Hubsch and will begin working with the State Attorney’s Office to formalize the case and how she will be apprehended. The investigation is ongoing; Coral Gables Police will continue updating the community as necessary.

Alexa Lopez may be contacted at alopez@themiamihurricane.com. 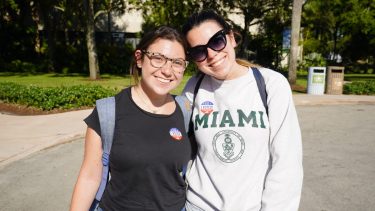