Aurore Boyd reached into the water and ran her small fingers across the back of the purple sea slug that clung to the walls of the glass tank.

“It feels like a pillow, like a silky pillow,” said the third-grader from Touching Miami With Love, an afterschool program in Overtown. “But why is it stuck to the wall, and what is that stuff it just squirted out?”

Boyd was one of 200 elementary school students that contributed to the buzz of questions that could be heard on the university green Saturday morning at the third annual Ocean Kids. With 15 interactive stations managed by more than 100 volunteer marine science undergraduate students, the program aimed to instill a passion for learning and curiosity beyond the classroom for the marine environment and conservation issues.

“We want the kids to walk away with a new interest and passion for our ocean and environment. If we can inspire one child to have more of an awareness of the ocean then it’s worth it,” Kait Birghenthal, co-chair of Ocean Kids said.

The event began at 9 a.m. for the students, which were primarily third-graders, from Liberty City, Earlington Heights and Miami Gardens Elementary, as well as students from the Overtown afterschool program. Ocean Kids was funded by donations through the nonprofit foundation Future Interests in Nature and Sea (F.I.N.SEA) and UM’s Rosenstiel School of Marine and Atmospheric Science.

Peta-Gay Grandison, a third-grade teacher from Liberty City, said that being exposed to science combined with the intimate interaction with the college students was an invaluable experience for the young students.

Grandison explained that marine life and environmental conservation are discussed in the classroom, but participating in Ocean Kids puts more emphasis on those issues. Each student has been assigned to respond to their participation in the program through a journal entry and presentation on one marine animal.

Now in its third year, the program has doubled the number of elementary school students that participate, and is expanding internationally with an Ocean Kids event in Kuwait and the Bahamas funded by a grant from the Clinton Global Initiative.

“I just really hope that through this program the students have a greater understanding of the threats to the ocean,” said Dr. Jill Richardson, co-founder of F.I.N.SEA. “But the main thing is the inspiration and that they share what they learn at home with their friends and family.”

At one station during Ocean Kids called “Solution to Pollution,” the elementary school students dipped feathers in bowls of oil and attempted to clean the feathers with dishwashing soap to simulate the harmful effects of oil on marine life.
“We learned that when the oil gets on the birds, it’s hard to clean off and that putting oil in the water kills the fish,” said Trayvon Bryant, a third-grader from Liberty City.

But the most favored station was “Inky Business” where students dissected a squid, examining its external and internal anatomy. Wearing a glove and using child-safe scissors, Bryant cut into the eye of the squid and detached the lens.
“It looks like something in one of those packets you get in shoe boxes that say not to eat them,” said Bryant, comparing the lens of the fisheye to a particle from the inside of a silicon packet.

After completing all 15 stations, each student had a brightly colored marine animal face-painted on their cheek. One boy had the intricate scene of a shark eating another shark across the right side of his face. The students were then sent off with snorkel masks, marine life coloring books and plastic bags with the remains of their squid dissection.

When the students were asked who wanted to be a marine biologist when they were older, almost 200 small hands reached up to the sky. 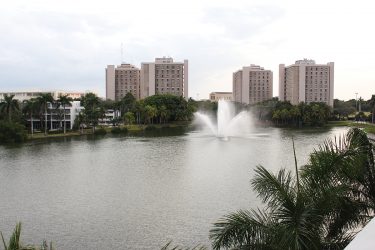 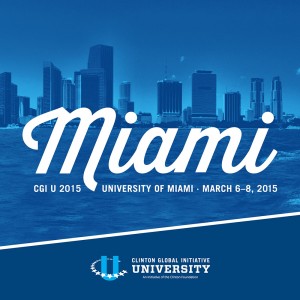 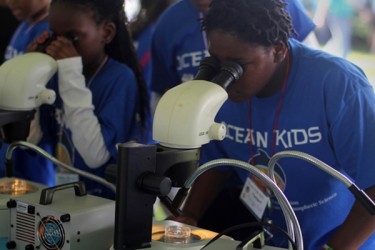