Home » Preview: The School of Architecture’s CANstruction for the needy

Preview: The School of Architecture’s CANstruction for the needy

On Wednesday students, staff, faculty and alumni will try their hands at the third annual “CANstruction” contest hosted by the School of Architecture.

The object of the competition is to build the best “CANstruction,” in the allotted time. Teams rely on well-known structures to out stack their competition, using donated food cans of all sizes.

The contest requires that hundreds of canned food items be donated. The donations directly benefit the Camillus House food program, a local nonprofit that has provides humanitarian services to the poor and homeless since 1960.

Last year, eight teams entered into the competition, which managed to raise 1,020 cans of food for the charity.

Victor Chavez, a junior majoring in architectural engineering, participated in the contest last year, and says he is excited to return to the competition. Chavez’s team attempted to “CANstruct” the Burj Dubai, the tallest man-made structure ever built.

“The word needs to be spread out because there aren’t too many cans in the donation boxes right now,” Chavez said. “It is important that people contribute in order for the competition to be successful, and more importantly for the donations.”

Chavez, and other involved in the event are worried about the turnout as it enters into its third year.

“Usually [the cans] start coming in really fast the week of the event,” said Carolyn White, public relations manager for the School of Architecture. “We have a good amount of faculty involvement as well. At last years competition one professor donated about $200 worth of cans.”

The competition will take place at the architecture courtyard. Team members will have from noon to 2:30 p.m. on Wednesday, build their best “CANstruction.” All participating teams will be provided a free pizza lunch. The winning team will be awarded an additional prize.

To enter the competition email emaldonado@miami.edu with the team’s name, captain and number of team members.

Julian Glover may be contacted at jglover@themaimihurricane.com.

Dear V: How do I get this train rolling?
Sports briefs 11/15 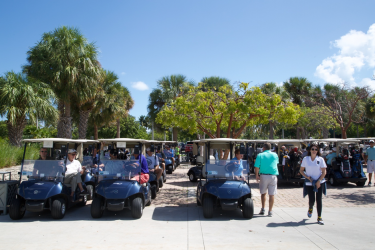