You cannot deny that he loves to eat. Standing at 6 feet, 10 inches, it takes a lot of food to fill this young man up.

From eating chicken heads and squirrel this past summer in Beijing to Quiznos sandwiches after stepping off the plane from China, redshirt sophomore center Reggie Johnson is an avid food lover.

His teammates are not the only ones noticing Johnson’s love for food.

“Pot stickers and hot pockets are his favorite food,” head coach Frank Haith said. “Reggie has lost 56 pounds, and I applaud him.”

Three years ago when he first arrived at UM, however, Johnson was close to 350 pounds. Now, despite his eating habits, he is around 300 pounds.

But when it comes to being on the court, Johnson has a different type of appetite: Johnson clogs up the paint, battles for respect and becomes a beast.

He set a new ACC Tournament freshman record, becoming the first newcomer to not miss a shot in a game when he went 8-for-8 from the field and 6-for-6 at the free-throw line. Johnson scored a season-high 22 points against the Wake Forest Demon Deacons. He was awarded “Most Improved Player” on the team.

In order to become a better basketball player while still enjoying this past summer, Johnson went to China with Athletes in Action.

The college players won every game they played against the Chinese Basketball Association.

While Johnson was in Beijing, he was a sight to see off the court. One afternoon, a “bat-like bug” ran into him at the Great Wall of China and Johnson dashed away. He ended up slipping and falling down some of the steps.

“I didn’t go all the way down. I stopped eventually,” Johnson said. “People were laughing at me and saying stuff in a language I didn’t understand. But I can imagine what they were saying.”

Everywhere he went, everyone noticed Johnson’s size and softly whispered,  “Yao friend” among each other while taking pictures with him. Johnson finally figured out what they were saying.

“They call me Yao friend,” Johnson laughed. “I don’t even know Yao Ming. I wish I did.”

Back in the United States, Johnson is proud to be a momma’s boy. Nicknamed “Big Reg,” he was raised alone by his mother in North Carolina. Johnson still remembers when his mother would sacrifice not eating to make sure her son was happy.

“She is working and working so I can eat,” Johnson said. “Some nights she didn’t eat because she had to feed big ol’me. Her willing to teach me to be good keeps driving me.”

At UM, Johnson knows that he has the influence to make changes in peoples’ lives through the community. He plans on making the most out of his opportunities.

“We, as athletes, have the opportunity to affect many lives,” Johnson said. “We show kids to work for everything you want and we do it in the right way. We can affect a lot of people.” 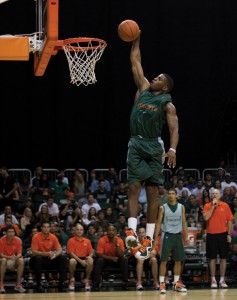