Home » A coven of vampires that doesn’t suck

A coven of vampires that doesn’t suck

If you could sit through a Malawi-born vocalist-DJ duo called The Very Best, which felt out of place outside of a dance club, and Beach House, an atmospheric indie outfit with droning synths and a vocalist with an androgynous, nasally voice, you were handsomely rewarded by Vampire Weekend’s set at the Fillmore Miami Beach at the Jackie Gleason Theater Oct. 13.

Each member emerged wearing button-down shirts and either khakis or jeans with  “All I Do Is Win” (presumably ironically) accompanying their entrance, epitomizing their snarky, joyful identity. These traits were echoed in the ska-inspired opener “Holiday,” their latest single.  And the light-hearted mood pervaded the rest of the show contrary to the common charge that Vampire Weekend is too clean-cut and silly to be seriously embraced by the hipster community.

From beginning to finish a room of 20-somethings happily danced, clapped, and sang along with every lyric. Innovations in their live show, such as arena rock-esque percussion and additional sampling, also shut down the charge that many songs on their self-titled album feel insubstantial and overly simplistic.

The crowd was well-involved during “One,” calling back its lyrics “Blake’s got a new face,” as well as during “Mansard Roof,” where fans were advised to wiggle their hands in the air during the song’s impressive guitar riff.

Highlights included “A-Punk,” which ignited a dance pit, the complex instrumentation of “Diplomat’s Son,” the sugar-pop sing-along “Horchata,” and “Walcott,” the encore finale where a thousand voices became one in defaming the Cape. The tame numbers “Taxi Cab” and “Brynn” disrupted the frenzy of the set, but they were minor blips in an otherwise flawless show.

The set lasted a breezy 75 minutes, just short enough to both keep you from getting bored and wishing they had more songs (they played their entire discography save “The Kids Don’t Stand a Chance” and “I Think Ur A Contra”). Vocalist Ezra Koenig announced that this was their last U.S. tour before starting work on their next album.  Fortunately, fans have a fond memory to hold onto until VW turns out their next great work.

William McAuliffe may be contacted at wmcauliffe@themiamihurricane.com. 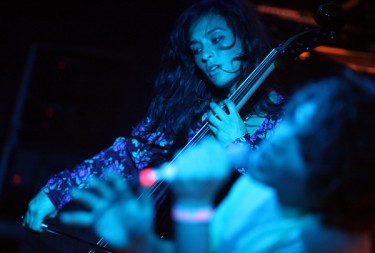