The University of Miami split its pair of matches at Cobb Stadium this past weekend.

“I think any win in the ACC is big,” head coach Tricia Taliaferro said. “It definitely feels good when you haven’t beaten a team in program history to be able to do that.”

The winning goal came in the 89th minute with a shot by senior Brittney Steinbruch to the lower right post. It was Steinbruch’s sixth goal of the season. With the goal, she became the Hurricane’s all-time leader in points with 75, passing Brittney Butcher.

“For ACC games, it’s always going to be a battle, so 90 minutes you come to play,” Steinbruch said. “You’ve got to keep playing, and everyone certainly did.”

Duke outshot the Hurricanes 17-7. Junior Vikki Alonzo kept the team in the game with eight saves as she recorded her fifth shutout of the year.

Just a minute after Steinbruch’s game-winning goal, freshman Tara Schwitter scored her second goal of the year on the last play of the game to make the final score 2-0.

“For her to play as well as she did, it was really nice to be able to see her score that goal,” Taliaffero said.

Both teams came out aggressively, with Miami recording 20 fouls and Wake forest 21. Three Canes were given yellow cards during the game: freshman Blake Stockton in the 44th minute, senior Barbara Blocker in the 50th minute and junior Ashlee Burt in the 68th minute.

“I thought Wake did a good job as far as coming in and breaking the rhythm of the game and being able to get a couple of goals early against the momentum,” Taliaferro said.

In the 34th minute, Katie Stengel dribbled into the box on a ball from Casey Luckhurts and lobbed the ball over Alonzo for the first goal of the game. Jordan Feger got a cross past Alonzo to Bianca D’Agostino, who kicked it into the open net to make the score 2-0 in the 42nd minute.

In the 77th minute, Stengel dribbled through the Miami defenders before shooting the ball to the lower right post for her second goal of the game to make the score 3-0 for the Demon Deacons.

“I think we worked hard,” senior Brittney Macdonald said. “Things didn’t really go our way and we gave them some opportunities to. “

In the 86th minute, Macdonald headed in a corner from senior Lauren Singer to make the final score 3-1.

“We will learn from this obviously and get better,” Taliaferro said. “It’s still early in the ACC season and we’re prepared for NC State.”

The Hurricanes next face NC State in North Carolina at 7 p.m. Thursday.

Debora Rubi may be contacted at drubi@themiamihurricane.com. 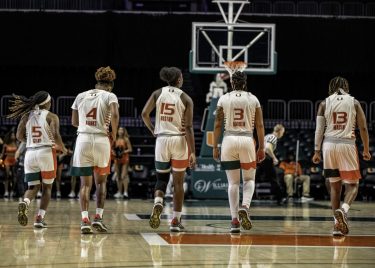 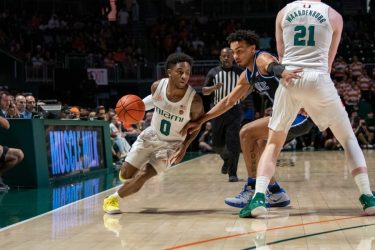