Frustration among University of Miami students over failing printers has died down over the past month as the technology department has raced to install a system upgrade that will prevent future breakdowns.

Scott Britton, a spokesperson for the library explained that the technology department worked hard to fix the problem as soon as it surfaced.

“Each time they tried a solution, they needed to shut down UPrint to make the corrections, so both the problems and installing solutions caused service interruptions,” Britton said.

Adding two servers to the system was the summer goal for the IT specialists. UPrint had been failing due to overloads and needed to grow comparatively with the growing demand.

This change, paired with the return of thousands of demanding students who all wanted to print out syllabuses for their first day back, caused campus-wide irritation.

The staff at Otto G. Richter Library, an already noisy and often chaotic mecca for students to work, bore the brunt of aggravated students.

“It was a nightmare because everyone needed to print at one moment but there was nothing we could do,” said Vanessa Rodriguez, an Information Specialist at Richter.

Students rushing around on the first day of classes were most affected by the printing problem.

“The last thing I want to worry about on my first day of school is the printer failing,” said Alixandra Bigley, a sophomore at UM. “It was so unnerving to be mentally ready for classes but have none of the first readings printed out. Some of my professors were even underprepared because they were unable to print too.”

A single server does not have the capacity to handle printing in all of the computer labs and libraries on campus. Now that the kinks are worked out, the upgrade and two additional servers should prevent these problems from occurring and be better able to handle the needs of the students and faculty in the future.

Danielle Landau may be contacted at dlandau@themiamihurricane.com. 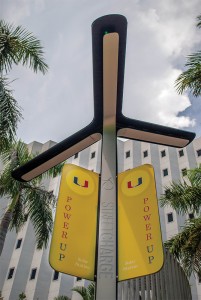