Eli Benhamour, Oasis worker and active member of the Jewish community, talks to sophomore Aaytin Goodman of New York. Goodman states, "Eli is the coolest. He makes the best food." Goodman and Eli were discussing the new T-shirts for the Israel Study Abroad program for spring 2011. Marlena Skrobe//The Miami Hurricane

If it were up to Eli Benhamou, a familiar face at Oasis Deli, educating others would not be limited to the classroom.

Benhamou, the manager and staff supervisor at the University of Miami’s campus kosher deli, is committed to teaching Jewish students on campus about their heritage through the food he serves.

“I see it as a privilege to provide a kosher atmosphere for students trying to study to learn a profession, so they can continue their heritage in pursuit of a secular vocation,” Benhamou said.

Benhamou began working at Oasis in 2008 when President Donna Shalala wanted to open Oasis to better cater to the diverse dietary needs of the student body. The University of Miami’s Rabbi Fellig contacted Benhamou who had previously worked for his father, a local rabbi in Coconut Grove.

Put simply, Kosher dietary laws determine what can and can’t be eaten according to the Torah. This includes ingredients, the way food is cooked and how meat is slaughtered. Everything served at Oasis abides by these rules.

The proposition of a Kosher-certified deli inspired Benhamou.

“I saw it as an opportunity to help students naturally continue their way of life,” he said.

Benhamou, who was born in Brooklyn and raised according to Jewish tradition, appreciates the mesh of cultures at UM. At Oasis, he enjoys seeing how his own culture connects to everyone else’s.

Students of all religions and ethnicities come to Oasis to enjoy the food that Benhamou serves.

“I come because it’s just good Jewish food,” said Jacob Weithorn, a regular at Oasis. “I’m not kosher but I do observe the high holidays.”

According to his coworkers, it is his enthusiasm that keeps people going into Oasis.

“He’s a trip!” said Amiya Mattox, who has worked with Benhamou since the deli opened. “He’s just so funny and he loves to eat.”

Junior Michael Slan, who eats at Oasis at least twice a week, is drawn to Benhamou’s generosity.

“Eli’s a cool guy. Sometimes when they’re about to close, he gives me free soup,” Slan said.

Benhamou serves more than just kosher food at the UM. He also shares guidance in hopes that students will be inspired to live faithfully.

“If I have one message I want to convey it’s for people to love who they are and indentify themselves, especially according to Torah,” he said.

Dear V: Do I need to tattoo ‘Dyke’ on my forehead?
Four Loko a cheap but potentially harmful buzz 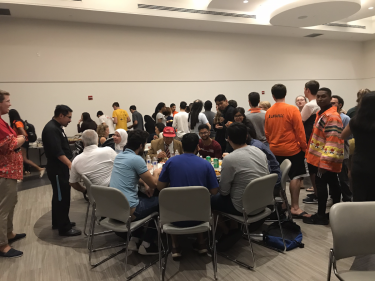