On a rainy Tuesday morning at approximately 10:55 a.m. a Hurry ‘Canes shuttle, filled to capacity with students heading to class, crashed into a black SUV driven by a University of Miami student. The accident happened outside of the Ponce Garage, as the bus driver attempted a right hand turn on to Ponce De Leon Boulevard.

According to UMPD Lieutenant Michael Colombo, the student driving the SUV was cited for “improper passing.”

“There was no damage to the shuttle bus as far as I know,” said Richard Sobaram, director of parking and transportation services. “I did hear that it caused a traffic jam near the garage.”

Sobaram said that the accident was not the shuttle driver’s fault. No one was injured in the accident.

A UM senior, who preferred to remain anonymous, but was on the shuttle at the time of the crash, said the shuttle driver had to ask students to squeeze toward to back of the bus so that all the student standing could fit behind the yellow safety line.

“This is the busiest time of day for the shuttle pick ups,” Colombo said.

This fall the parking and transportation department restructured the shuttle routes, cut down on wait times, eliminating several stops and creating two direct routes instead of three. The shuttle involved with the crash was headed to the fountain stop at the time of the accident, but the UM senior on board said that it was not an express.

The restructured system has reduced wait time at the remaining shuttle stops, but during the busiest times on campus the shuttles are often filled to capacity. 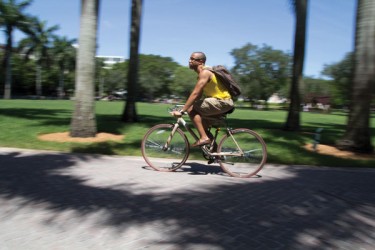