Home » The next terrific tight end

The next terrific tight end

Tight end Chase Ford is adjusting to life in the big city after spending the first 20 years of his life in the lone star state. The quaint town of Corrigan is a lot different than the upscale life of Coral Gables.

No longer is there a Texas Burger right across the street from his home, instead there is a Five Guys.

“There isn’t a Texas Burger around here but I found out about the restaurant called Five Guys. I didn’t even know it was a restaurant until I got down here. But I’ll tell you, it’s pretty good,” Ford said with a grin.

The 6-foot-6, 245 pound junior college transfer is expected to be a major asset to the Hurricanes offense this year. Miami lost all three of its tight ends last year due to graduation. Senior Richard Gordon is the only current tight end with experience on the roster.

“He has been doing really well,” head coach Randy Shannon said. “Chase has learned the offense and we are excited about it. I don’t think he has had a bad day out here beside the first week and that is just from him learning and getting the tempo down. Otherwise, he has been very competitive and getting better with his blocking.”

Offensive coordinator Mark Whipple loves to involve the tight ends as part of his game plan. Last year, Miami receivers caught 25 touchdown passes and 40 percent of those were caught by tight ends.

“I love the system,” Ford said. “I like how it works. Good mix of everything. You need to look over the playbook every night to make sure you know everything.”

Miami has had a long list of great tight ends wear the orange and green. Legends like Bubba Franks, Jeremy Shockey, Kellen Winslow Jr. and Greg Olsen were all icons.

Shannon, usually tight lipped, has continually praised Ford’s efforts throughout fall training camp. Shannon compares him to Shockey, who transferred to UM after a stint at Northeastern Oklahoma A&M College.

Ford was the MVP of his Southwest Junior College Football Conference at Kilgore Junior College. He caught 32 balls for 545 yards.

Ford is taking a humble approach though and isn’t letting the hype get in his head.

“I’m just coming out everyday to be the best I can be. If I happen to be a great tight end at the U then I’m blessed and thankful for it.”

Ford was unable to enroll at UM in the spring due to reasons unknown so he got his degree from his Junior College and also worked as a maintenance worker cutting grass and changing light bulbs to make extra money until he could come to Miami in June.

Senior running back Damien Berry is impressed with how quickly Ford has fit in.

“When he first came in I was a little shaky on him,” said Berry scratching his head. “But he came around, he learned his plays. He is going to be a good asset to this offense. He is doing a great job of blocking guys like Allen Bailey and Adewale Ojomo.”

Ford didn’t have any division one scholarship offers coming out of high school. He said division three schools offered him a spot on their roster, but he would have had to pay.

He elected to go the junior college route.

“When I went to play college football I never knew it was going to come to this,” Ford said. “I just played because I liked playing.”

Ford impressed many coaches and began receiving division one offers. He narrowed his choices to Arizona and Miami.

So what was the determining factor?

“It’s the U first off,” Ford said. “Great tradition over the years. They had a good club coming off of last year’s team and I felt they had the best chance to win it all.”

Choosing Miami may still ultimately take Ford to Arizona though.

Ford would love to win it all. That means he would have a chance go to Arizona and live the best of both worlds as the national championship game is in Glendale, AZ this year.

“That would be lovely,” Ford said with a big smile. “That’s the goal to get there.” 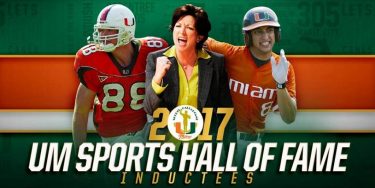