Home » Senior hit by moving vehicle while walking toward campus

Senior hit by moving vehicle while walking toward campus

Marie Cushmore was struck walking from CVS at the U.S. 1 and Mariposa Court intersection.

Marie Cushmore was walking back from filling a prescription at the CVS across from campus when a SUV struck her.

On Wednesday at approximately 9:30 p.m., the University of Miami senior was hit by a black Ford Expedition as she was crossing U.S. 1 and Mariposa Court.

According to Cushmore, she was crossing the street as the “stop” hand at the end of the pedestrian walkway was blinking. Cushmore thought she would have enough time to get across. She was trying to make it to a meeting on campus.

The driver, who Cushmore said might not have seen her since it was dark and she was wearing her dark green Academic Fellow shirt, swerved away from her and hit her with his taillight.

“I knew the guy didn’t mean to hit me,” Cushmore said.

Cushmore remained conscious as she was knocked into the grass by the Metrorail station.

“It’s hard to see what the lights are changing to,” she added.

Cushmore was immediately checked in to the Jackson Ryder Trauma Center where she was under 24-hour observation. While she did not experience any head trauma, she did receive extensive bruising and other injuries.

“It was a lot to go through because of the injuries I’ve sustained,” Cushmore said. “The Jackson Memorial Health service was a big part of helping me to recover. Friends, family and staff have been very supportive.”

Cushmore declined to comment further on her injuries because she is still recovering. Coral Gables police who worked on the case were unavailable for comment.

The intersection where Cushmore was hit has had a history of accidents involving UM student pedestrians. Over five years ago, UM student Ashley Kelly was killed when she was hit by a SUV that ran a red light on U.S. 1 and Mariposa Court.

Since 1990, seven students have been struck crossing Ponce de Leon Boulevard and U.S. 1. Three of the incidents have resulted in death.

“It’s really infuriating because that intersection has always been so dangerous,” said Caroline Mauriello, a friend of Cushmore’s. “I feel that people turning from U.S. 1 just don’t pay attention.”

After the accident, Student Government passed the “Ashley Kelly Resolution” to build a pedestrian overpass across U.S. 1 at Mariposa. The bridge was expected to be completed by spring 2010, however, there has been no movement to begin construction due to lack of Miami-Dade County funding.

“We have been working with Miami-Dade County and will be engaging the city of Coral Gables in an effort to speed completion of this project,” read an official statement released by the university Thursday afternoon. 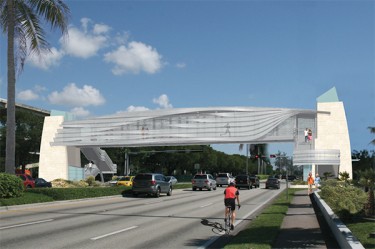