At  baseball games, fans always eat the traditional food that complements America’s favorite pastime. Hot dogs, peanuts and cracker jack are the typical snacks of choice. But at Alex Rodriguez Park at Mark Light Field, milkshakes are the hot commodity.

Milkshake vendor Mitch Freedman has been making his delicious frozen treats at Miami Hurricane games for over 25 years.

His stand, called The Home Plate Creamery, has been cooling people off  longer than most of the students at UM have been alive.

Battling the South Florida heat is tough, but a Freedman milkshake is just the thing to cool you down.

Outfielder Michael Broad is a big fan of the milkshakes. He even drinks them before games to get a boost.

“Those milkshakes have been at the field for as long as I could remember,” Broad said. “When I was little I would always come to the games and have them, but now that I am a player and he is still here making them and I can enjoy them before a game is so cool.”

Freedman says that his milkshakes are the best in town because he uses only natural ingredients and does it all by hand.

“We use the same mentality as Papa John’s pizza; better ingredients, better pizza,” he said.

Fourth-year pitcher Eric Erickson believes milkshakes could even be a recruiting tool.

“Being able to have a quality milkshake from A-Rod Park is an added benefit of being a Hurricane ball player,” the southpaw said.

Due to the new stadium, Freedman has had to make a few adjustments in location and appliances.

Having a good workspace and a lot of appliances that help him produce milkshakes faster has been better for business.

“People always used to have to wait and now this location has cut down the waiting time for all my customers,” he said.

Freedman could not disclose how many he sells per game, but he did say the most popular flavors are chocolate and Oreo.

Michelle Salom may be contacted at msalom@themiamihurricane.com. 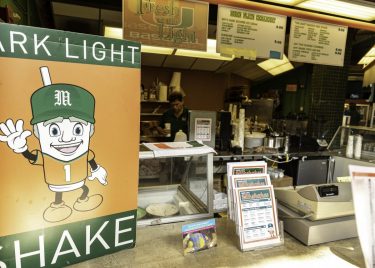