FOOTBALL
Miami will hold an intrasquad scrimmage at 7 p.m. at Lockhart Stadium in Fort Lauderdale. The scrimmage will be open to the public. Gates will open at 6 p.m. and players will take part in an autograph session from 6-6:45 p.m.
men’s Basketball
The 12th-seeded Hurricanes (18-12, 4-12) will play the fifth-seeded Wake Forest Demon Deacons (19-9, 9-7) at 2 p.m.  Thursday in the opening round of the Atlantic Coast  Conference  Tournament in Greensboro, N.C.
Senior forward Dwayne Collins will not play due to a leg injury.

4The 13th-ranked Hurricanes (8-3) beat the University of Central Florida Knights by a score of 19-2 on Tuesday night in Orlando.
4 Freshman shortstop Stephen Perez led the team with four hits and six RBI.

Calvin Cestari may be contacted at cmcestari@themiamihurricane.com

Canes teeter on the edge of NIT play
Dear V: I have long lips… 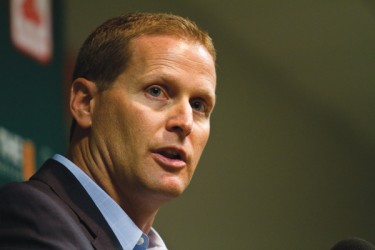