The 10th-ranked Hurricanes won two of three from Riverdale, New York’s Manhattan College this past weekend.  The Canes first loss of the season came on lackluster pitching from redshirt senior Jason Santana and relievers Daniel Miranda and Iden Nazario. Miami will host a three-game series with the Florida Gators this upcoming weekend.

The men’s team allowed another lead to slip away in the waning minutes this weekend against North Carolina State’s Wolfpack. It will look to rebound in Chapel Hill against a struggling Tar Heel squad that has only mustered four ACC wins a year after being crowned NCAA Champions.

Shenise Johnson was named a mid-season candidate for the Naismith Award, which is given to the best men’s and women’s college basketball players, respectively. After beating the Boston College Eagles at home on Sunday, the Canes set their sights on Wake Forest in the first round of the ACC Tournament on Thursday night in Greensboro, North Carolina.

Blacksburg, Va. – Sophomore hurdler Devon Hill broke his own school record, placed first in the ACC Championships and qualified for Nationals this past weekend with a 7.78 in the men’s 60m hurdles, while junior sprinter Ashley Dukes defended Miami’s 2009 win at ACCs with a 7.34 in the women’s 60m dash.  Despite great individual performances, the Hurricanes placed ninth overall. 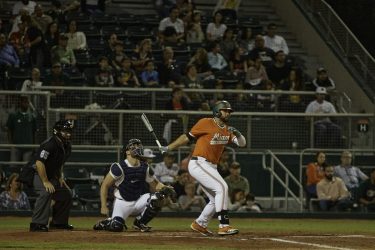