John Mayer’s “Battle Studies” concert at the BankAtlantic Center on Thursday was like a beautiful disaster of a relationship- raunchy and reciprocal with intentions of staying the night. Starting off with a few sweet treats, he flattered the audience with his lyrical luster.

After a few drinks and some smooth talking, he shyly revealed the pinnacle of his talent when he played songs off his “Continuum” album. It was almost a spiritual experience- staring glossy-eyed at the white streams of light puncturing the billowing smoke and repeating the mantra, “keep me where the light is.”

After belting out the painfully delicious “Gravity,” he finished the escalating concert with a divine guitar solo that could only be described as ‘orgasmic.’ It was as if after that moment of heightened pleasure, where concert-goers connected on a deeper level than simply that of performer and audience; we saw the real John Mayer.

As his fingers slid gently over the tense frets, and the notes bent in ways too pleasing for words, the vulnerable side under Mayer’s current bad-boy, “Perfectly Lonely” persona reared its handsome head.

“You sound beautiful,” he softly told the shrieking audience, as if the last thing he expected was sincere, intense praise after shredding the guitar and our hearts.

In addition to being a phenomenal performer, Mayer made the night for many of his most loyal fans when he spent 15 minutes signing autographs outside of his tour bus.

“Back up a little bit,” he told bubbling teenage fans after the show. He laughed deeply and uncapped a Sharpie and said reassuringly, “I’m not going anywhere.” 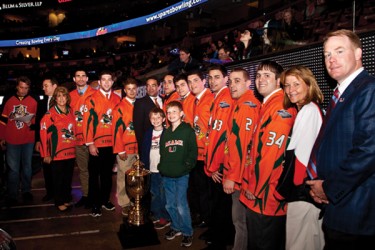