Aside from the initial 23 seconds of the Champs Sports Bowl, the University of Miami football team played like their only focus was how to spend their Bowl gift, a $420 Best Buy gift card.

As a result, the Canes (9-4, 5-3) ended their 2009 season in disappointment, losing to the Wisconsin Badgers by a score of 20-14 December 29 at the Citrus Bowl Stadium in Orlando. The Canes’ defensive unit actually played well, especially considering that they were on the field for two-thirds of the game; however, the offensive unit performed poorly and the Canes fell short and left more questions about their future unanswered.

A win would have earned the football program its first 10-win season since 2003.  A win would have also likely guaranteed the Canes a top 10 preseason ranking for the 2010 campaign.  A win would also have proven that these Canes are tough enough to win a cold weather game. Temperature at kickoff was 50 degrees.

Under third-year head coach Randy Shannon, the Orange and Green have demonstrated their problems winning in less than optimal conditions. For example, in 2007, the Canes lost cold weather road games to Virginia Tech and Boston College. Last year, Florida State beat the Canes in a monsoon, and Georgia Tech crushed the Hurricanes on a chilly Thursday night in Atlanta. Then, as an exclamation point on the 2008 campaign, California outlasted the Canes in the Emerald Bowl played in cold, foggy and damp San Francisco. Even this year, the Virginia Tech Hokies pounded the Hurricanes in cold, sloppy conditions in Blacksburg, Virginia.

Entering the fourth and final year of Shannon’s contract, the Canes football program faces numerous questions. First, the Canes currently have no verbal commitments from the latest rivals.com top 100 prospects. Secondly, sophomore quarterback Jacory Harris had offseason surgery on his ailing right thumb, and his return for spring practice is doubtful. Accordingly, two inexperienced quarterbacks, 5-foot-9-inch freshman A.J. Highsmith and early enrollee Stephen Morris (a local recruit from Monsignor Pace High School) will lead the Canes in spring practice. Thirdly, with the departure of All-ACC veteran tackle, Jason Fox, the offensive line has major holes to fill. Finally, the secondary needs to improve dramatically after a season marked by a lack of coordination between the defensive backs, numerous missed tackles and a growing problem of opposing tight ends beating the Canes over the middle.

Since Miami moved to the Atlantic Coast Conference in 2004, they have yet to win the Coastal Conference and earn an appearance in the ACC Championship game. Improving the Canes’ record by two wins in each of the last three years is progress, but the Hurricane faithful have their eyes on a sixth national championship. Players on every team get hurt, so youth and injuries cannot be a valid excuse.

Consider the track record of Alabama Coach Nick Saban, who brought a National Championship to the Crimson Tide in just three years.

The Hurricanes face another demanding non-conference schedule this fall with road games at Ohio State and at Pittsburgh (a 10-win team in 2009).

On the positive side, this year nearly all the players enrolled from Shannon’s heralded No. 1 rated recruiting class in 2008 will be experienced juniors.

Let’s hope the Hurricanes players bought mini-DVD players from Best Buy, so they can watch film all spring and summer. With much to prove, next year will be an even more important season for this talented team. 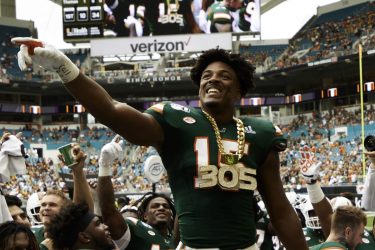