Jacory Harris was mortal to say the least. After the fast 3-1 start against four top 25 teams he has faded down the stretch. Harris was playing injured for the ladder part of the season when he injured his hand against North Carolina in November and also appeared to have hurt his left ankle in the bowl game. But that is not an excuse. Harris was 16-for-29 with 188 yards and a touchdown. He had a lost fumble as well. Harris needs to work on check downs. Numerous times he never made any adjustments if he saw the intended receiver was not open and would force passes in double coverage. He needs to learn to dump the football out to a running back in the flat and check down. Going deep every time is not the answer. Harris was never able to capitalize on opportunities.

The first play from scrimmage was the best offensive play of the night. Cooper scampered 16 yards up the left sideline for a touchdown after the Corey Nelms illegal block in the back negated the Sam Shields 84 yard touchdown run. Not one running back had more than five carries. The run game needs to be established in order to set up the pass. Damien Berry had a 23 yard run but still doesn’t get the respect he deserves from the coaches as he continues to get single digit carries.

LaRon Byrd must catch the half back pass from Graig Cooper in the second series of the game. Although the throw by Harris on 4thand 10 on the final drive was out of the reach of the out stretched arms of Thearon Collier, Collier had his finger tips on that ball and should have hauled it in. Kudos to Tommy Streeter, as he made a very nice 47 yard catch on a straight go route. Leonard Hankerson only had one catch, but he will have an opportunity to make more next year as he declared he will come back for his senior season. Too bad the three senior tight ends were never involved.

The Canes got beat badly at the line of scrimmage. Wisconsin had five sacks and was constantly knocking Harris around. The o-line never missed Co-Team MVP Jason Fox so much. The collective unit was a giant turn style as both the run and pass game were not effective. It took Miami 58 minutes to sustain a drive that resulted getting in the red zone. A.J. Trump had a couple of bad snaps. Brandon Washington’s stud performance against USF looked like an aberration.

The defensive line played real well considering the Badgers were on the field for 39:15, while UM had the ball for 20:45, nearly double the time. Olivier Vernon proved when healthy he can be a dominant pass rusher. Allen Bailey consistently draws double teams. Micanor Regis had a clutch interception. Sure Champ Sports Bowl MVP John Clay ran for 121 yards and scored twice, but that was expected coming from the Big 10 Offensive Player of the Year.

Tight ends continue to burn UM over the middle. Miami had over a month to prepare and could not stop the short passing game. It’s never a good sign when three of the top five tacklers in the game were defensive backs. Vaughn Telemaque, once compared by head coach Randy Shannon to Ed Reed, does not deserve to be in the same sentence as him. The only bright spot was when Brandon Harris stripped tight end Garrett Graham inside the five yard line in the fourth quarter with the score 17-7. Randy Phillips recovered in the end zone.

The opening kick return was just a smoke screen although was electrifying. The Canes scored in 23 seconds to take a 7-0 lead thanks to Cooper’s reverse lateral to Shields. Shields raced down the left side line using his 4.20 40 yard dash speed and scored. But the touchdown was called back because special teams’ guru Corey Nelms committed a penalty. Matt Bosher’s punts were short but he definitely made up for it with his brilliant onside kick and recovery. After Collier caught a 14 yard touchdown with 1:21 left to make it a one possession game, Bosher recovered his onside kick to keep UM on life support. The Canes went four and out.

“I’m not satisfied, I’m proud of this football team,” said head coach Randy Shannon the day after the frustrating 20-14 loss to Wisconsin. The Canes lost to a mediocre Big Ten team in essentially a home game for Miami. Mark Whipple’s play calling was not good to say the least. There were no screen passes to counteract the blitz. Tight ends were not utilized. Adjustments were not made. And after the game, players did not show up for the Alma Mata. The players stormed off the field in disgust instead of paying respect to the loyal fans and the band of the hour, which battled the cold elements. That is the coaches’ job to tell these young gentlemen to show dignity. Miami still has not won 10 games in a season since 2003. Shannon says going into the off season the Canes must work on running the football and third down defense. Fans have eight months to wait to see if next year is the year. 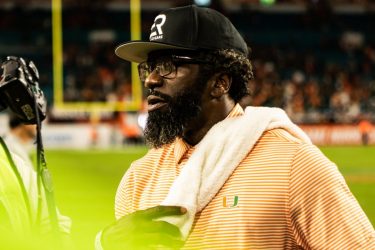